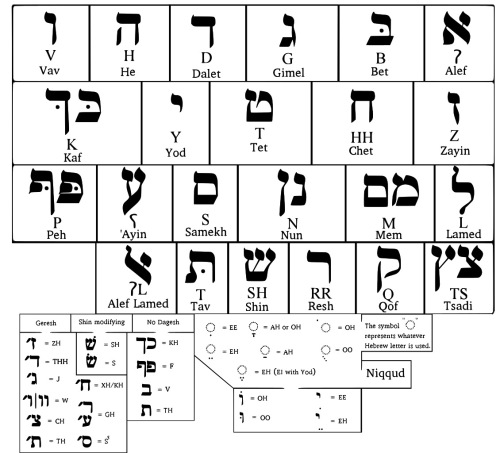 The Hebrew alphabet. Compiled and posted by Assyrio on Wikipedia. The copyright holder releases this work into the public domain, granting anyone the right to use this work for any purpose without any conditions, unless such conditions are required by law.

“Despite this, Abulafia did not think that this matrix of all languages (which coincides with the eternal, but not with the written, Torah) corresponded yet to Hebrew. Here Abulafia made a distinction between the twenty-two letters as a linguistic matrix, and Hebrew as the mother tongue of humanity.

The twenty-two Hebrew letters represented the ideal sounds which had presided over the creation of the seventy existing languages. The fact that other languages had more vowels depended on the variations in pronouncing the twenty-two letters. In modern terminology, the new foreign sounds would be called allophones of the fundamental Hebrew phonemes.

The assimilation of bestial sounds showed that these were the languages of peoples who had abandoned the right path and true conduct of their lives. In this sense, another result of the confusion of Babel was the multiplication of letters.

Alemanno was aware that there were also other peoples who considered their languages as superior to all others. He cited Galen, who claimed that Greek was the most pleasing of all languages and the one that most conformed to the laws of reason.

Not daring to contradict him, he attributed this fact to affinities he saw as existing between Greek, Hebrew, Arabic and Assyrian.

For Abulafia, the twenty-two Hebrew letters represented the entire gamut of sounds naturally produced by the human vocal organs. It was the different ways of combining these letters that had given rise to the different languages.

The word zeruf (combination) and the word lashon (language) had the same numerical value (386): it followed that the rules of combination provided the explanation to the formation of each separate language.

Abulafia admitted that the decision to represent these sounds according to certain graphic signs was a matter of convention; it was, however, a convention established between God and the prophets.

Being aware that there existed other theories which claimed that the sounds which expressed ideas or things were conventional (he could have encountered such an Aristotelian and Stoic notion in Jewish authors like Maimonides), Abulafia, nevertheless, invoked a rather modern distinction between conventionality and arbitrariness.

Hebrew was a conventional but not an arbitrary language. Abulafia rejected the claim, maintained, among others, by certain Christian authors, that, left entirely to itself, a child would automatically begin to speak Hebrew: the child would be unaware of the convention.

Yet Hebrew remained the sacred mother tongue, because the names given by Adam, though conventional, were in accordance with nature. In this sense, Hebrew was the proto-language.

Its existence was a precondition for all the rest, “For if such a language did not precede it, there couldn’t have been mutual agreement to call a given object by a different name from what it was previously called, for how would the second person understand the second name if he doesn’t know the original name, in order to be able to agree to the changes.” (Sefer or ha-Sekhel; cf. Idel 1989: 14).

Abulafia lamented that his people in the course of their exile had forgotten their original language. He looked on the kabbalist as a laborer working to rediscover the original matrix of all the seventy languages of the world.

Still, he knew that it would not be until the coming of the Messiah that all the secrets of the kabbala would be definitively revealed. Only then, at the end of time, would all linguistic differences cease, and languages be reabsorbed back into the original sacred tongue.”