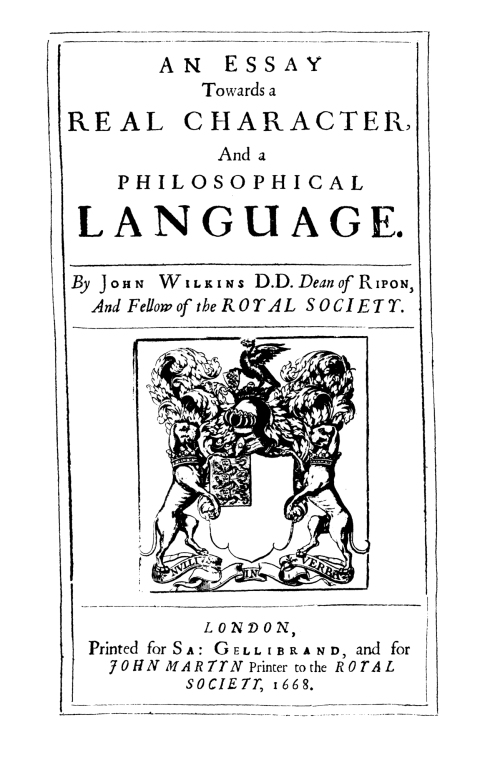 John Wilkins (1614-1672), An Essay Towards a Real Character and a Philosophical Language, London, John Martin, 1668. This work is in the public domain in its country of origin and other countries and areas where the copyright term is the author’s life plus 100 years or less.

“Already in Mercury, a book principally devoted to secret writing, published in 1641, Wilkins had begun to design a project for universal language. It was not until 1668, however, that he was ready to unveil his Essay towards a Real Character, and a Philosophical Language–the most complete project for a universal and artificial philosophical language that the seventeenth century was ever to produce.

Since “the variety of Letters is an appendix to the Curse of Babel” (p. 13), after a dutiful bow in the direction of the Hebrew language and a sketch of the evolution of languages from Babel onwards (including an examination of the Celto-Scythian hypothesis that we considered in ch. 5), and after an acknowledgment of his precursors and his collaborators in the compilation of classifications and of the final dictionary, Wilkins turned to his major task–the construction of a language founded on real characters “legible by any Nation in their own Tongue” (p. 13).

Wilkins observed that most earlier projects derived their list of characters from the dictionary of one particular language rather than drawing directly on the nature of things, and from that stock of notions held in common by all humanity.

Wilkins‘ approach required, as a preliminary step, a vast review of all knowledge to establish what these notions held in common by all rational beings really were.

Wilkins never considered that these fundamental notions might be Platonic ideas like Lull’s dignities. His list was rather based upon empirical criteria and he sought those notions to which all rational beings might either attest or, reasonably, be expected to attest: thus, if everybody agrees on the idea of a God, everybody would likewise agree on the botanical classification supplied to him by his colleague John Ray.

In reality, the image of the universe that Wilkins proposed was the one designed by the Oxonian culture of his time. Wilkins never seriously wondered whether other cultures might have organized the world after a different fashion, even though his universal language was designed for the whole of humanity.

The Tables and the Grammar

In appearance the classification procedure chosen by Wilkins was akin to the method of the Porphyrian Tree of Aristotelian tradition. Wilkins constructed a table of 40 major genera (see figure 12.1) subdivided into 251 characteristic differences. 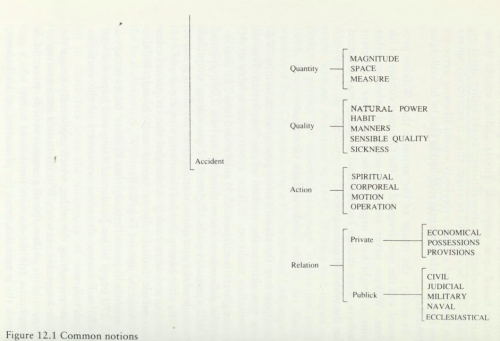 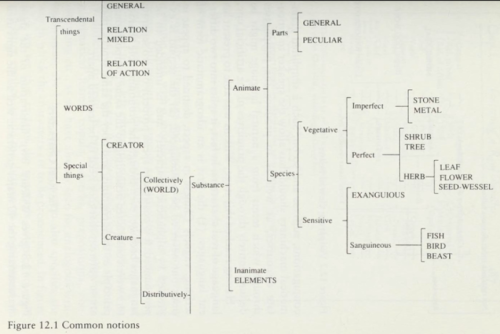 From these he derived 2,030 species, which appear in pairs. Figure 12.2 provides a simplified example of the procedure: starting from the major genus of Beasts, after having divided them into viviparous and oviparous, and after having subdivided the viviparous ones into whole footed, cloven footed and clawed, Wilkins arrives at the species Dog / Wolf. 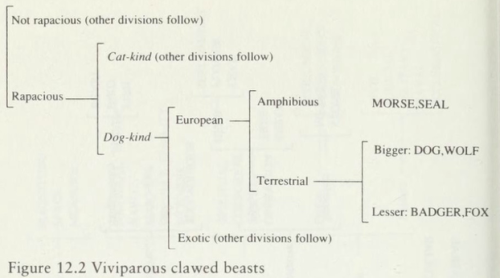 I might add parenthetically that Wilkins‘ tables occupy a full 270 pages of his ponderous folio, and hope that the reader will excuse the summary nature of the examples which follow.

After presenting the tables, which supposedly design the whole knowable universe, Wilkins turned his attention to his natural (or philosophical) grammar in order to establish morphemes and the markers for derived terms, which can permit the generation, from the primitives, of declensions, conjugations, suffixes and so on.

Such a simplified grammatical machinery should thus allow the speaker to articulate discourses, as well as to produce the periphrases through which terms from a natural language might be defined entirely through the primitives of the artificial one.

Having reached this stage, Wilkins was able to present his language of real characters. In fact, it splits into two different languages: (1) the first is an ideogrammatic form of writing, vaguely Chinese in aspect, destined to appear in print but never to be pronounced; (2) the second is expressed by alphabetic characters and is intended to be pronounced.

It is possible to speak properly of two separate languages because, even though the pronounceable characters were constructed according to the same compositional principle as the ideograms, and obey the same syntax, they are so different that they need to be learned apart.”