John Wilkins (1614-1672), Essay towards a Real Character and a Philosophical Language, London, John Martin, 1668, p. 387. This work is in the public domain in its country of origin and other countries and areas where the copyright term is the author’s life plus 100 years or less. From Umberto Eco, The Search for the Perfect Language, p. 243.

“Figure 12.3 gives Wilkins‘ own illustration of the signs characterizing the 40 major genera as well as the signs used to indicate differences and species.

The fundamental sign is a simple dash with a modification at its center to indicate genus. Differences and species are indicated by little hooks and bars attached to the two extremities of the dash: those attached to the left extremity signify differences; those to the right signify species.

A different series of signs, extremely difficult to read, is provided to indicate opposition, grammatical forms, copula, adverbs, prepositions, conjunctions, etc., as we have already seen for analogous writing systems. 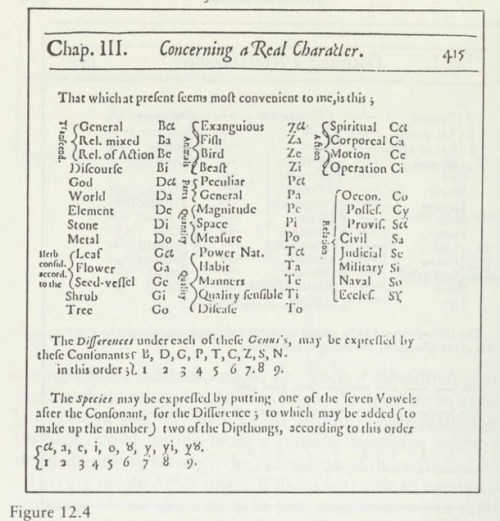 As I have said, the system also specifies the way in which the characters are to be pronounced. In figure 12.4 we see that each of the genera is assigned its own two-letter symbol, while the differences are expressed by the consonants B, D, G, P, T, C, Z, S, N and the species by the addition of seven vowels and two diphthongs. Here is one of Wilkins‘ own examples:

Figure 12.5 gives the first line of the Lord’s Prayer in characters.

The first two signs therefore mean “Our Father” and are pronounced Hai coba. As a matter of fact, the phonetic language is clearer also as a form of writing, and our following examples will mainly rely on it.”