Eco: Before and After Europe, 2 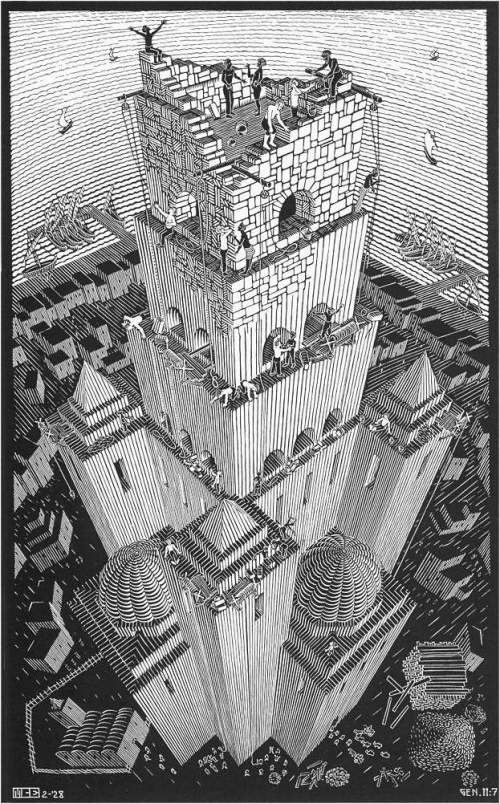 MC Escher, Tower of Babel, 1928. This image of a drawing is copyrighted by the artist, who died in 1972. Low-resolution images of works of art for purposes of critical commentary qualify for fair use under United States copyright law.

“Despite this, by the second century AD, there had begun to form the suspicion that Latin and Greek might not be the only languages which expressed harmoniously the totality of experience.

Slowly spreading across the Greco-Roman world, obscure revelations appeared; some were attributed to Persian magi, others to an Egyptian divinity called Thoth-Hermes, to Chaldean oracles, and even to the very Pythagorean and Orphic traditions which, though born on Greek soil, had long been smothered under the weight of the great rationalist philosophy.

By now, the classical rationalism, elaborated and re-elaborated over centuries, had begun to show signs of age. With this, traditional religion entered a period of crisis as well. The imperial pagan religion had become a purely formal affair, no more than a simple expression of loyalty.

Each people had been allowed to keep its own gods. These were accommodated to the Latin pantheon, no one bothering over contradictions, synonyms or homonyms. The term characterizing this leveling toleration for any type of religion (and for any type of philosophy or knowledge as well) is syncretism.

An unintended result of this syncretism, however, was that a diffused sort of religiosity began to grow in the souls of the most sensitive. It was manifested by a belief in the universal World Soul; a soul which subsisted in stars and in earthly objects alike.

Our own, individual, souls were but small particles of the great World Soul. Since the reason of philosophers proved unable to supply truths about important matters such as these, men and women sought revelations beyond reason, through visions, and through communications with the godhead itself.

It was in this climate that Pythagoreanism was reborn. From its beginnings, Pythagoreans had regarded themselves as the keepers of a mystic form of knowledge, and practiced initiatory rites.

Their understanding of the laws of music and mathematics was presented as the fruit of revelation obtained from the Egyptians. By the time of Pythagoreanism’s second appearance, however, Egyptian civilization had been eradicated by the Greek and Latin conquerors.

Egypt itself had now become an enigma, no more than an incomprehensible hieroglyph. Yet there is nothing more fascinating than secret wisdom: one is sure that it exists, but one does not know what it is. In the imagination, therefore, it shines as something unutterably profound.

That such wisdom could exist while still remaining unknown, however, could only be accounted for by the fact that the language in which this wisdom was expressed had remained unknown as well.

This was the reasoning of Diogenes Laertius, who wrote in his Lives of the Philosophers in the third century AD:

“There are those who assert that philosophy started among the Barbarians: there were, they claim, Magi among the Persians, the Chaldeans, the Babylonians, the Assyrians, the Gymnosophists of India, the Druids among the Celts and Galatians” (I).

The classical Greeks had identified barbarians as those who could not even articulate their speech. It now seemed that these very mumblings were of a sacred language, filled with the promise of tacit revelations (Festugière 1944-54:I).

I have given a summary of the cultural atmosphere at this time because, albeit in a delayed fashion, it was destined to have a deep influence on our story. Although no one at the time proposed the reconstruction of the perfect language, the need for one was, by now, vaguely felt.

We shall see that the suggestions, first planted during these years, flowered more than twelve centuries later in humanistic and Renaissance culture (and beyond); this will constitute a central thread in the story I am about to tell.

In the meantime, Christianity had become a state religion, expressed in the Greek of the patristic East and in the Latin still spoken in the West. After St. Jerome translated the Old Testament in the fourth century, the need to know Hebrew as a sacred language grew weaker. This happened to Greek as well.

A typical example of this cultural lack is given by St. Augustine, a man of vast culture, and the most important exponent of Christian thought at the end of the empire.

The Christian revelation is founded on an Old Testament written in Hebrew and a New Testament written, for the most part, in Greek. St. Augustine, however, knew no Hebrew; and his knowledge of Greek was, to say the least, patchy (cf. Marrou 1958).

This amounts to a somewhat paradoxical situation: the man who set himself the task of interpreting scripture in order to discover the true meaning of the divine word could read it only in a Latin translation.

The notion that he ought to consult the Hebrew original never really seems to have entered Augustine’s mind. He did not entirely trust the Jews, nurturing a suspicion that, in their versions, they might have erased all references to the coming of Christ.

The only critical procedure he would allow was that of comparing translations in order to find the most likely version. In this way, St. Augustine, though the father of hermeneutics, was certainly not destined to become the father of philology.”