” … we present a survey of the objects in the hands of apkallū on reliefs, seals, and in the Kleinplastik. The survey is not meant to be complete. It is based on the recent treatments of Rittig (Kleinplastik), Kolbe (Reliefprogramme), and Reade (BaM 10 17ff.).

Bird Apkallu and Fish Apkallu, side by side. Apkallu statuettes of this design were buried in appropriate places in the home of a Babylonian exorcist. They were believed to have prophylactic qualities, guarding the home from evil.

Identification of ūmu-apkallū on reliefs:

The description and incantation of the ūmu-apkallū make it clear that they are anthropomorphic figures of human descent; the material they are made of also distinguishes them from the gods and the monsters and apkallū of non-human lineage.

That the horns of divinity are lacking in the description then is not a coincidence (as it is in the case of the il bīti). On amulets, in a context clearly defined by the bed of the sick man and the presence of fish-apkallū, only one figure is available for identification with the ûmu-apkallū (see above); this figure serves as a check on any identification of the ūmu-apkallū in the less clear context of the palace reliefs.

Umu-Apkallu, with right hand raised in greeting. The banduddu bucket is in the left hand. Later analysts focus on the rosette patterns on the headdress and bracelets of um-apkallu, and their earrings.

There is no reason why the ūmu-apkallū must appear on reliefs; the text quoted by Reade BaM 10 38i27 may have belonged to fish- or bird-apkallū (text I/7). However, the apparent bearing of our rituals on the apotropaic subject-matter of the reliefs, and more specifically the presence of the bird- and fish-apkallū, leads us to expect them.

Although ritual I/II prescribes specific attributes for each type of apkallū, the actual fish- and bird-apkallū of the Kleinplastik show that this specificity is a forced choice between a number of more or less equivalent attributes; we must not expect the ūmu-apkallū to have held only the object denoted by e’ru, whatever it is; the ūmu-apkallū of the Lamaštu amulets confirm this point. 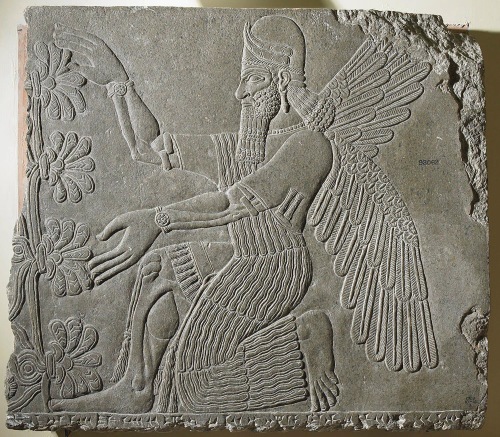 This well-preserved bas relief retains incredible detail. The daggers carried in the Umu-Apkallu’s waistband are clear, as is the rosette styling on his wristbands. The earrings are more distinct than most other examples, and the headdress appears to be of the horned-tiara type. The umu-apkallu appears to wear bracelets on his upper arms. Tassels are apparent on the fringes of his robe, as well as behind the neck.

The banduddû, identified with certainty with the bucket, thus isolates two groups with anthropomorphic members: the (winged) figures with headband and the (winged) figures with horned tiara (we will return to them below). The other attributes of the members of both groups can be made to match the attributes of the apkallū known from the texts; the horned figures, however, must be gods, and since the apkallū are no gods, the figures with the headband should be the apkallū (so Reade BaM 10 37; differently Kolbe Reliefprogramme 14ff., cf. 41f. 47, 50).

The banduddu buckets are discernible in the left hands of these bird-apkallu statuettes.

The ūmu-apkallū of the Lamaštu-amulets confirms this identification: decisive is the headband defining this type of supernatural beings (this band with daisy-like flowers differs from the diadem with two strips of cloth pendant behind, worn by the king or the crown-prince, cf. Reade Iraq 29 46, Iraq 34 92f.).

Unfortunately the headgear of the ūmu-apkallū is described only as agê ramāni-šunu, “crowns (cut out) of their own (wood)”; agû denotes a variety of functionally similar divine or royal headgears (CAD A/1 157a).

The different dress of the apkallū of the Lamaštu amulets cannot be adduced against identification with the apkallū of the reliefs; differences in dress are attested for the bird-apkallū as well, cf. Kolbe Reliefprogramme Pl. IV/1 and 2, Iraq 33 Pl. XiVe, Rittig Kleinplastik Fig. 20ff.; ūmu-apkallū with a shawl covering the legs appear on seals (VAR 675, probably CANES 705).”