Was the Birs-i-Nimrud the Historical Tower of Babel?

“At any rate, in Babylonia itself the primitive cult of the mountains could be carried on only artificially. The sacred mountains of the plain were the mounds which marked the sites of ancient temples, or the towers which rose within them in order that the priest might continue on their summits that close communion with heaven which he had once enjoyed on the high places of the mountain-tops.

In the story of the Deluge, the mountain peak of Nizir, where the rescued hero of the legend built his altar and poured out his offerings, is called a ziggurrat, or temple-tower. Conversely, “the mountain of the world” was the name given to a temple at Calah; and the mountain of ‘Sabu, to which the god Zu took his flight, was Kharsak-kalama, “the mountain of mankind,” an artificial mound near Kis.

The most famous of these sacred tels or mounds, however, was the famous tilu ellu, “the illustrious mound,” at Borsippa, now represented by the Birs-i-Nimrud. Nebo, to whom the great temple of Borsippa was dedicated, is called its god (H.C. Rawlinson, The Cuneiform Inscriptions of Western Asia, 1886, ii. 54, 71). 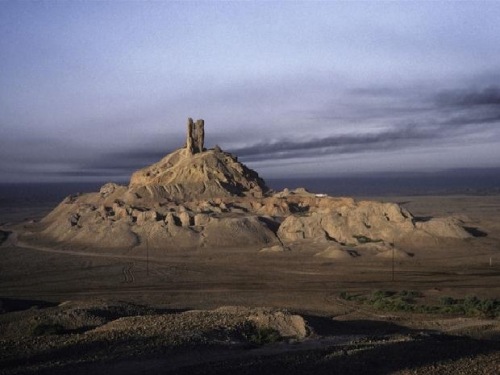 One of “the three great” or secret “names of Anu” was that of “the lord who issues forth from the illustrious mound” (H.C. Rawlinson, The Cuneiform Inscriptions of Western Asia, 1886, iii. 68, ID), in reference to the fact that the Accadian prototype of Nebo was once the universe itself, in which the seven spheres of light were set, and around which the ocean-stream wound like a rope or serpent.

When the old god of Borsippa had passed into the Semitic Nebo, the attributes which had formerly connected him with the firmament of heaven were transferred to Anu, the sky-god of the official cult.

A fragmentary tablet, which gives us, as I believe, the Babylonian version of the building of the tower of Babel, expressly identifies it with “the illustrious mound.” Here we are told of the leader of the rebellion that when “the thought of his heart was hostile” and he “had wronged the father of all the gods,” when “he was hurrying to seize Babylon,” and “small and great were mingling the mound,” “the divine king of the illustrious mound” intervened, “Anu iifted up (his hand) in front” and prayed “to his father the lord of the firmament.”

“All day long he troubled” them; “as they lamented on their couch he ended not” their “distress.” “In his wrath he overthrows (their) secret counsel; in his (fury) he set his face to mingle (their) designs; he gave the command (?), he made strange their plan” (William Saint Chad Boscawen, Transactions of the Society of Biblical Archeology, v. 1.)

The very word that the Hebrew writer uses in order to explain the origin of the name of Babylon, and which the Authorised Version translates “confound,” is here employed of those who “mingled together” the mound, and whose designs were afterwards themselves “mingled'” by the god of heaven.

It would seem, therefore, that legend had referred the attempt to build the tower whose head should reach to heaven to the autumnal equinox; at any rate, it is clear that the mound of Borsippa was not only in existence, but was already in a state of ruin when the Accadian calendar was first drawn up.”

A.H. Sayce, Lectures on the Origin and Growth of Religion as Illustrated by the Religion of the Ancient Babylonians, 5th ed., London, 1898, pp. 405-7.