The Bel of this legend, who has settled the places of the Sun and the Moon in the sky, is not the Babylonian Bel, but the older Bel of Nipur, from whom Merodach, the Bel of Babylon, had afterwards to be distinguished.

The Accadian original of the poem belongs to a very early epoch, before the rise of Babylon, when the supreme Bel of the Semitic inhabitants of Babylonia was still the god whom the Accadians called Mul-lilla, “the lord of the lower world.”

This Bel or Mul-lilla fades into the background as the Semitic element in Babylonian religion became stronger and the influence of Babylon greater, though the part that he played in astronomical and cosmological lore, as well as his local cult at Nipur, kept his memory alive; while the dreaded visitants of night, the demoniac lilu and lilat or lilith, from the lower world, preserved a faint memory of the spirits of which he had once been the chief. 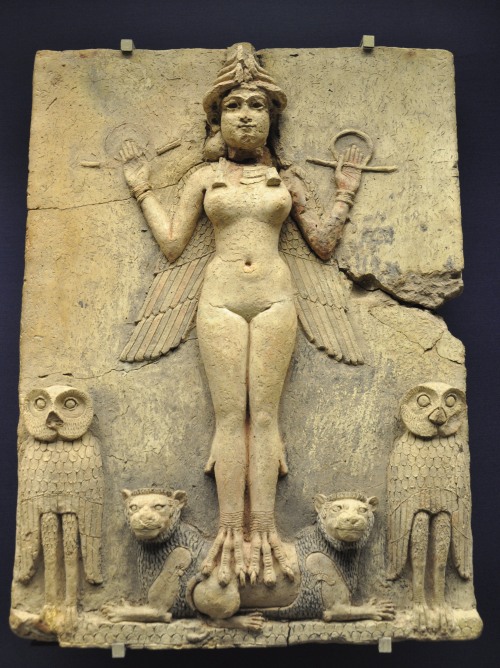 Burney Relief, Babylon (1800-1750 BCE). The figure in the relief was sometimes identified with Lilith, based on a misreading of an outdated translation of the Epic of Gilgamesh. Modern research has identified the figure as either Ishtar or Ereshkigal.
https://upload.wikimedia.org/wikipedia/commons/1/19/Burney_Relief_Babylon_-1800-1750.JPG

One by one, however, the attributes that had formerly attached to the older Bel were absorbed by the younger Bel of Babylon.

It was almost as it was in Greece, where the older gods were dethroned by their own offspring; in the Babylonia of Nebuchadnezzar and Nabonidos, it was the younger gods–Merodach, Sin and Samas–to whom vows were the most often made and prayer the most often ascended.

Such was the latest result of the local character of Babylonian worship: the younger gods were the gods of the younger Babylonian cities, and the god of Babylon, though he might be termed “the first-born of the gods,” was in one sense the youngest of them all.

The title, however, “first-born of the gods” was of the same nature as the other title, “prince of the world,” bestowed upon him by his grateful worshippers. It meant little else than that Babylon stood at the head of the world, and that its god must therefore be the first-born, not of one primeval deity, but of all the primeval deities acknowledged in Chaldea.

According to the earlier faith, he was the first-born of Ea only. Ea was god of the deep, both of the atmospheric deep upon which the world floats, and of that watery deep, the Okeanos of Homer, which surrounds the earth like a coiled serpent.

All streams and rivers were subject to his sway, for they flowed into that Persian Gulf which the ignorance of the primitive Chaldean imagined to be the ocean-stream itself. It was from the Persian Gulf that tradition conceived the culture and civilisation of Babylonia to have come, and Ea was therefore lord of wisdom as well as lord of the deep.

His son Merodach was the minister of his counsels, by whom the commands of wisdom were carried into practice. Merodach was thus the active side of his father Ea; to use the language of Gnosticism, he was the practical activity that emanates from wisdom.”

A.H. Sayce, Lectures on the Origin and Growth of Religion as Illustrated by the Religion of the Ancient Babylonians, 5th ed., London, 1898, p. 103-4.