Kvanvig: The Maqlû Ritual Against Witchcraft

“The gods of the night play a particular prominent role in the ritual against witchcraft, Maqlû.

The ilū mušīti are here invoked in the opening sentence. In the same sequence the maccarātu ša mūši are invoked: “may the three watches of the night dispel her (the sorceress’) evil enchantments” (Maqlû I, 30. Cf. T. Abusch and D. Schwemer, Das Abwehrzauber-Ritual Maqlû (Verbrennung), in Texte aus der Umwelt des Alten Testaments, A. Krüger, ed., 2008: pp. 136-86.)

Excerpt from the entry on Nusku, Jeremy Black and Anthony Green, Gods, Demons and Symbols of Ancient Mesopotamia, 1992, p. 145.

In Bīt Mēseri the invocation of the apkallus clearly takes place in the daytime. This ritual is followed by a nightly invocation to Nusku:

“Nusku, king of the night, who illuminates darkness!

You are present in the night and behold humans.”

Nusku is invoked that he may “appo[int] a watcher of health and life (for me)!” (III, 8). The text continues: “Let the protective spirit and the god who preserves health stand b[y my head(?)].”

Thus “the watcher of health and life” is not identified, other than to show that he belongs together with the two other divine figures protecting the ill man during the night.

The mentioning of the protective spirit, šēdu, together with an unnamed god may indicate that this god is the supplicant’s personal god, since this juxtaposition is quite common. (Cf. Black & Green, Gods, Demons and Symbols, 148). 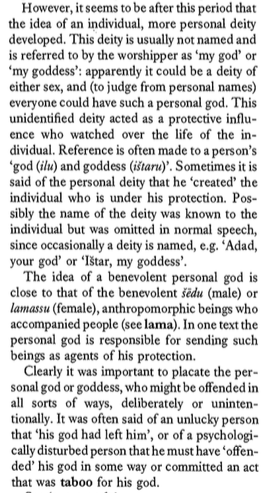 Excerpt from the entry on personal gods, Jeremy Black and Anthony Green, Gods, Demons and Symbols of Ancient Mesopotamia, 1992, p. 148.

As we will see below the apkallus played an important role in the ritual of breathing life into the statues of the gods. This ritual lasted during the day and the night as well. The apkallus belonged to the day part of the ritual.

In the night the statue was carried to the river bank and offerings were made to the nine great gods; then to the gods of the craftsmen who had made the statue; then to planets, fixed stars and celestial constellations. (Cf. Reiner, Astral Magic, 138-42.)

The stars and the planets were to irradiate the statue. In the Late Babylonian version of the ritual the appeal to the stellar powers is described in detail, naming the different groups; this part of the ritual is lacking in the earlier Assyrian version, which demonstrates a development toward astral religion in Late Babylonian times.

When the apkallus had the role of the watchers of the cosmos and human life during the day, the same role was assigned to the stars during the night.”