Kvanvig: Human Knowledge is Dangerous to the Cosmic Order

“We now turn to Uan, the first apkallu. In Bīt Mēseri he is described in the following way: uanna mušaklil usurāt šamê u erseti, “Uanna, who completed the plans of heaven and earth” (line 1).

We have already examined the content of this clause. The wisdom described here is all-encompassing; the first apkallu is included in the divine knowledge about both the structure of the cosmos and the fate of humans. 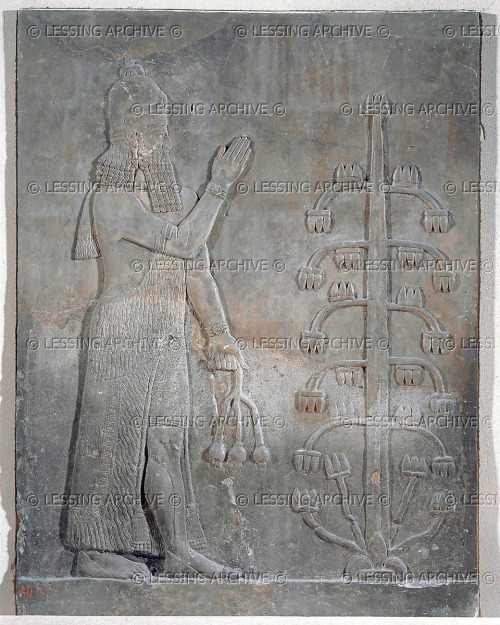 Finally compare this representation. Wings are missing. The horned headdress has two levels of horns, and is again surmounted with what appears to be a fleur-de-lis.
Like other examples, this figure holds what appear to be poppy bulbs, and raises his right hand in the greeting gesture.
Bracelets with rosettes are present, as are armlets on the upper arms.
The sacred tree before the figure varies from other depictions, as well.
It is not certain that this figure depicts an ummânū at all. It could portray a king. The lack of wings is clearly deliberate.
Bas-relief, Louvre, AO 19869

To some extent this concerns all the seven apkallus, but there is a difference; the seven apkallus together kept the plans of heaven and earth in order (lines 12-13). They were not as a group involved in creating them. We have an analogy here to the relationship between the first apkallu, Oannes, and the seventh apkallu, Odakon, in Berossos. Oannes revealed to humankind everything necessary to know; Odakon explained detail what Oannes had revealed (sic).

This all-encompassing knowledge is interesting compared to the knowledge of Adapa in the myth. According to the beginning of the myth in fragment A, Adapa’s knowledge is described in the following way: uzna rapašta ušāklilšu usurāt māti kullumu, “he made him perfect with broad understanding to reveal the plans of the land” (Nineveh fragment A obv. i. 3).

He is broad in understanding, but his wisdom does not include the divine realm. This seems to be in opposition to what is said about Ea in fragment B: ea ša šamê īde, “Ea who knows heaven” (Amarna fragment B. obi. 14). 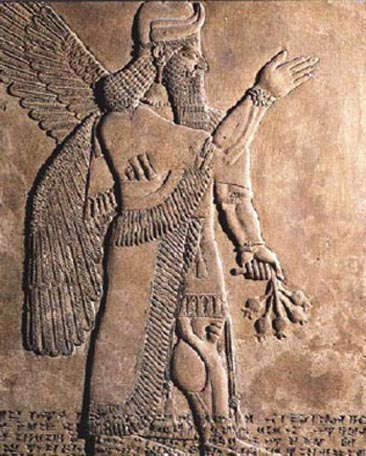 This exemplar of an Ummânū raises his right hand in the greeting gesture and holds what appear to be poppy bulbs in his left hand.
Rosette bracelets are apparent on his wrists, and he wears the horned tiara indicative of divinity.

When Adapa arrives before Anu in heaven, Anu presupposes that Ea has revealed everything to Adapa, since Adapa had the power to paralyze the South Wind simply through his speech: ammīni d ea amīlūta lā banīta ša šamê u erseti ukillinši libra sabra iškunšu, “Why did Ea expose to a human what is bad in heaven and earth? Why did he establish a “fat heart” (in) him?”

Anu thinks that Ea has revealed to Adapa the same extensive wisdom about heaven and earth that Ea himself has, and Anu considers this bad, because it is dangerous for the cosmic order when humans possess it, which Adapa clearly has demonstrated.”