Nakamura: the āšipu was Master of the Figurines

The Buried and Enclosed

“The multiple layers of concealment in this Neo-Assyrian figurine ritual suggest a play on the hiding and receiving powers of the earth.

Nakamura: “By burying figurines of powerful beings, the āšipu preserves an expressed belief in a present reality of supernatural power, mythological origin and divine order.”

Such diverse practices surely supported an equally diverse range of meanings. But in a basic sense, burial can mean to store, preserve, and put the past on hold (Harrison 2003:xi). This concept of burial holds purchase in the way in which protection relates to memory.

By burying figurines of powerful beings, the āšipu preserves an expressed belief in a present reality of supernatural power, mythological origin and divine order.

Burial keeps things hidden and protected such that preservation binds memory to a specific locality, from which it can be retrieved in the future as a given past. And this preservation of the future configures protection as survival.

It is interesting to mention here a temporal particularity in the Akkadian language that designates the “past” as lying before and the “future” as lying behind (Maul 1997:109), a stark reversal of our modern notions.

Mythology also seems to corroborate the notion that Mesopotamians “proceeded with their backs to the future,” as it were. Berossos’ Babyloniaka presents the primordial sage Oannes as having taught humans all the arts of domestic and cultural life.

Other myths regard this knowledge of the civilized arts as a gift from the god Enki (Ea). What is striking in both of these accounts is that the Mesopotamians believed that all cultural achievements — be they architecture, writing, healing, metalwork, carpentry, et cetera — were endowed to humans at the beginning of time, and this notion locates the ideal image of society in a primordial and mythological past rather than in a hopeful future (Maul 1997:109).

Furthermore, the figurines were not only buried, but also placed appropriately under the earth, in the space of the Netherworld and the apsû, the primordial freshwater ocean. 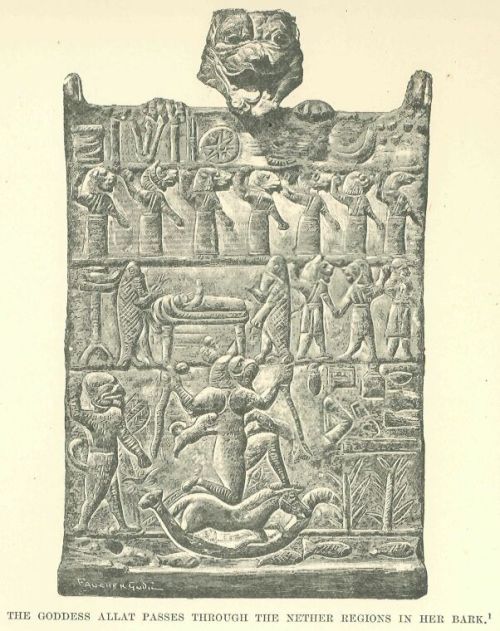 A depiction of the underworld.
Nergal appears at the top, leering over a top register which contains the eight-pointed star of Ishtar and the inverted half-moon crescent of the Moon God Sin.
In the second register, seven demons appear to support the heavens.
The middle register depicts the burial rites for new arrivals in the underworld, presided over by two fish-apkallū.
The lower register depicts the goddess Allat, or Ereshkigal, sister of Ishtar, who reigns in the underworld. She kneels upon a horse, which appears to be oppressed by her burden, in a boat which floats upon the waters of life. Note the lion pups suckling at her breast.
Drawn by Faucher-Gudin, from a bronze plaque of which an engraving was published by Clermont-Ganneau.
The original, which belonged to M. Péretié, is now in the collection of M. de Clercq.
http://www.gutenberg.org/files/17323/17323-h/17323-h.htm#linkBimage-0039

Numerous sources locate the underworld in the ground, beneath the surface of the earth (Black and Green 1992:180; Bottéro 1992:273–275). This idea follows from a traditional Mesopotamian conception of a vertical and bipolar universe where the earth, inhabited by living humans, separated the Heavens (šamû) from the Netherworld (ersętu) (Bottéro 1992:273).

And the borders of these domains were permeable, as entry to the Netherworld could be gained by way of a stairway leading down to the gate, while spirits could access the human world through cracks and holes in earth’s surface.

But importantly, the prevailing worldview of this time held that every being occupied a proper space in the world, with the lower hemisphere, symmetrical to the upper heavens, providing a discrete space and residence for the dead and other supernatural beings.

In this context, the burial of figurines of creatures from the underworld and apsû might constitute a mimetic gesture of placing or commanding such beings to their proper place in the world. This ritual practice not only reflects but reenacts the notion of an underworld located underground.

Furthermore, the strategic placement of the figurine deposits under certain architectural and household features may act to channel and focus the protective power of the beings, since they dwell in their “proper” realm.

The fact that the figurines were encased in boxes is also evocative of the important gesture of providing a “house” for the deities, and there could be no greater service rendered to a divine being than the building of his or her house (Frankfort 1978:267).

Additionally, the “immateriality” of a buried geography as an invisible, powerful presence is itself provocative.

The figurines, so installed, become effectively removed from the sensuous sphere of human–object relations. In this register of experience, they are “completed,” no longer engaging in processes of mutual constitution and becoming.

But the materiality of the figurine deposit endures and is powerful in this capacity to survive, virtually unmolested, performing its original duty; cut off from human relations, mute, blind, and restrained, they no longer strike back at human subjects, but can only direct their force to fighting off evil spirits in the Netherworld, as instructed by the āšipu.

There is a sense here of Derrida’s (1994) autonomous automaton, the animate puppet with a will of its own that yet obeys some predetermined program. By containing, concealing, and hiding these magical figures, the priest has made his mastery of their power complete.”