Sayce on the God Ea, or Oannes

“Ea, as we have already seen, was the god not only of the deep, but also of wisdom. Ancient legends affirmed that the Persian Gulf–the entrance to the deep or ocean-stream–had been the mysterious spot from whence the first elements of culture and civilisation had been brought to Chaldea.

“At Babylon there was a great resort of people of various races who inhabited Chaldea, and lived in a lawless manner like the beasts of the field.

In the first year there appeared in that part of the Erythraean sea which borders upon Babylonia, a creature endowed with reason, by name Oannes, whose whole body (according to the account of Apollodaros) was that of a fish; under the fish’s head he had another head, with feet also below similar to those of a man subjoined to the fish’s tail.

His voice, too, and language were articulate and human; and a representation of him is preserved even to this day.

“This being was accustomed to pass the day among men, but took no food at that season; and he gave them an insight into letters and sciences and arts of every kind. He taught them to construct houses, to found temples, to compile laws, and explained to them the principles of geometrical knowledge.

He made them distinguish the seeds of the earth, and showed them how to collect the fruits; in short, he instructed them in everything which could tend to soften manners and humanize their lives. From that time, nothing material has been added by way of improvement to his instructions.

Now when the sun had set, this being Oannes used to retire again into the sea, and pass the night in the deep, for he was amphibious. After this there appeared other animals like Oannes, of which Berossos proposes to give an account when he comes to the history of the kings.

Moreover, Oannes wrote concerning the generation of mankind, of their different ways of life, and of their civil polity.”

The exact etymology of the name which appears under the Greek dress of Oannes has not yet been ascertained. Lenormant thought that it represented Ea-khan, “Ea the fish.” But whether or not this is the case, it is certain that Oannes and Ea are one and the same. 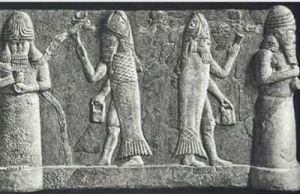 A depiction of Oannes, or Ea.

Ea, as we have seen, not only had his home in the waters of the Persian Gulf, he was also the culture-god of primitive Babylonia, the god of wisdom, the instructor of his worshippers in arts and science.

An old Babylonian sermon on the duty of a prince to administer justice impartially and without bribes, declares that if “he speaks according to the injunction (or writing) of the god Ea, the great gods will seat him in wisdom and the knowledge of righteousness.”

Ea was, moreover, like Oannes, represented as partly man and partly fish. Sometimes the fish’s skin is thrown over the man’s back, the head of a fish appearing behind that of the man; sometimes the body of the man is made to terminate in the tail of a fish.

A depiction of the God Ea, or Oannes.

A gem in the British Museum, on which the deity is depicted in the latter fashion, bears an inscription stating that the figure is that of “the god of pure life.”

Now “the god of pure life,” as we are expressly informed by a rubrical gloss to a hymn in honour of the demiurge Ea, was one of the names of Ea.”

A.H. Sayce, Lectures on the Origin and Growth of Religion as Illustrated by the Religion of the Ancient Babylonians, 5th ed., London, 1898, pp. 131-3.