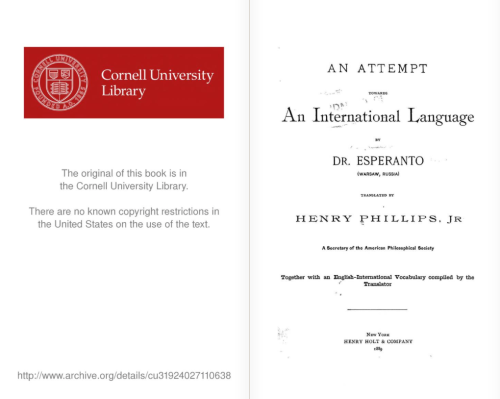 L.L. Zamenhof (1859-1917), as Dr. Esperanto, An Attempt Towards An International Language, Henry Phillips, Jr., trans., New York: Henry Holt & Co., 1889. Courtesy of Cornell University Library and archive.org. This work is in the public domain in its country of origin and other countries and areas where the copyright term is the author’s life plus 100 years or less.

“The twenty eight letters of the Esperanto alphabet are based on a simple principle: for each letter one sound, and for each sound one letter. The tonic accent always falls on the penultimate syllable. There is only one article, la, invariable for words of all genders–thus la homo, la libroj, la abelo. Proper names do not take an article. There is no indefinite article.

Concerning the lexicon, the young Zamenhof had already noted that in many European languages there was a logic of suffixes that produced both feminine and many derivative forms (Buch / Bücherei, pharmakon / pharmakeia, child / childish, rex / regina, host / hostess, gallo / gallina, hero / heroine, Tsar / Tsarina), while the formation of contraries was governed by prefixes (heureux / malheureux, happy / unhappy, legal / illegal, fermo / malfermo, rostom / malorostom–the Russian for “high” and “low.”)

In a letter of 24 September 1876, Zamenhof described himself as ransacking the dictionaries of the various European languages trying to identify terms with a common root–lingwe, lingua, langue, lengua, language; rosa, rose, roza, etc. This was already the seminal idea of an a posteriori language.

Wherever Zamenhof was unable to discover a common root, he coined his own terms, privileging Romance languages, followed by the Germanic and Slavic ones. As a result, any speaker of a European language who examined an Esperanto word list would discover:

(1). Many terms that were easily recognizable as being similar or identical to his or her own;

(2). Terms which, though deriving from a foreign language, were still easily recognizable;

(3). Terms which, though strange at first sight, once their meaning had been learned, turned out to be easily recognizable; and finally,

(4). A reasonably limited number of terms to be learned ex novo.

Esperanto also includes a comparatively large number of compound words. They are not inspired by the a priori projects, where composition is the norm, since the terms work like a chemical formula; Zamenhof could find compound words in natural languages (think of man-eater, tire-bouchon, schiaccianoci, to say nothing of German).

Compound words, moreover, permitted the exploitation of a limited number of radicals to the maximum. The rule governing the formation of compounds was that the principal word appeared at the end: thus–as in English–a “writing-table” becomes skribotablo.

The agglutinative principle which governs the formation of compound words allows for the creation of easily recognizable neologisms (cf. Zinna 1993).

From the radical stem, the neutral form is given by the suffix -o. This is not, as might appear, for example, to Italian or Spanish speakers, the suffix for the masculine gender, but merely serves as a mark for singular.

In natural languages many terms belonging to the same conceptual fields are frequently expressed by radically different lexical items. For instance, in Italian, given the conceptual field of parenthood, one must learn the meaning of padre, madre, suocero, genitori (father, mother, father-in-law and parents) before acknowledging that these terms belong to the same notional family.

Likewise, in English (as well as in other languages) there are different endings for terms which all express a job or an occupation, like actor, driver, dentist, president, surgeon.

In Esperanto the words for all occupations are marked by the suffix –isto, so that anyone who knows that dento is “tooth” will automatically know that a dentisto is a professional who deals with teeth.

The rule for the formation of adjectives is also simple and intuitively clear: adjectives are formed by adding the suffix -a to the root stem: “paternal” = patr-a; and they agree with nouns in number: “good parents” = bonaj patroj.

The six verbal forms are not conjugated, and are always marked by six suffixes. For instance, for the verb “to see” we have vid-i (infinitive), vid-as (present), vid-is (past), vid-os (future), vid-us (conditional) and vid-u! (imperative).

The motivation for this exception was that in non-flexional languages the accusative is the only case which is not introduced by a preposition, therefore it had to be marked in some way. Besides, the languages that, like English, had lost the accusative for nouns retain it for pronouns (I / me). The accusative also permits one to invert the syntactic order of the sentence, and yet to identify both the subject and the object of the action.