“The biblical patriarchs and the kings before the flood according to Genesis 5 and 4, Berossos and the Sumerian King List.

The most important information we can draw from this table is:

(P. Steinkeller, “An Ur III Manuscript of the Sumerian King List,” in Literatur, Politik und Recht in Mesopotamien: FS Claus Wilcke (ed. W. Sallaberger, K. Volk, and A. Zgoll; Orientalia Biblica et Christiana 14; Wiesbaden: Harrassowtz, 2003), pp. 267-92). (Ed. note: I have searched high and low for a digital copy of this article, which is ubiquitously cited in the literature, but nowhere available. If you have a scan or other digital version, please send it along so that it can be made more widely available. This is an important article that presents an Ur III tablet that is in a private collection. Thank you.)

As already mentioned, hypotheses on the interrelation of these biblical and Mesopotamian sources have flourished for millennia.

In our context the alleged connection of the biblical tradition with the Gilgamesh reception deserves mentioning. Alfred Jeremias, who published the first German translation of the Gilgamesh Epic in 1891, and Peter Jensen supposed that the Gilgamesh material is indeed the blue-print for all related biblical stories, denying them any originality.

From the present state of research this seems, at first sight, not even worth mentioning. It is, however, well-known that Gilgamesh’s fame, how much mixed and distorted the various Babylonian traditions may have become, exerted influence on many stories of ancient authors all over the Near East.

Thus the attestation of Gilgamesh’s name in the Dead Sea Scrolls does not come as a surprise. The name is mentioned in the Book of Giants, which was later adopted by the followers of Mani.

In the Book of Giants, Gilgamesh is the name of one of the giants—offspring of the fallen heavenly watchers and human women.

Another giant mentioned besides Gilgamesh is Hobabis, who may well be a distortion of the name of Gilgamesh’s adversary, Hu(m)baba (Assyrian) / Huwawa (Babylonian), the famous monster guarding the cedar forest, who was finally killed by Gilgamesh and his comrade Enkidu.

George also mentions a certain Theodor bar Konai (ca. tenth century C.E.) who “passed on a list of twelve postdiluvian kings that were held to have reigned in the era between Peleg, a descendant of Noah’s son Shem, and the patriarch Abraham. 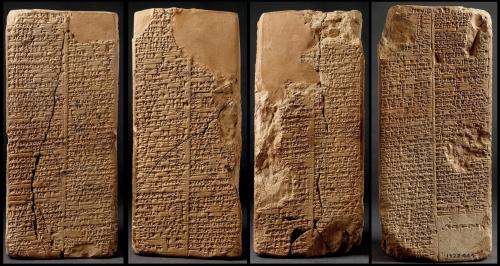 Among all the extant exemplars of the Sumerian King List, the Weld-Blundell prism in the Ashmolean Museum cuneiform collection represents the most extensive version as well as the most complete copy of the King List.
In this depiction, all four sides of the Sumerian King List prism are portrayed.
http://cdli.ox.ac.uk/wiki/doku.php?id=the_sumerian_king_list_sklid=the_sumerian_king_list_skl

The alleged Elamite origin of the monster’s name would nicely fit the observation that, from a Mesopotamian view, the localization of the cedar forest in historical times moved from the Eastern Zagros to the Western Lebanon.

Proof, however, is lacking. The name of the Babylonian flood hero Utnapishtim / Ziusudra is, so far, not attested in the extant manuscripts from Qumran.

The name does occur, however, in the form of At(a)nabīš (‘tnbyš) in fragments of the Book of Giants found at Turfan.”

Gebhard J. Selz, “Of Heroes and Sages–Considerations of the Early Mesopotamian Background of Some Enochic Traditions,” in Armin Lange, et al, The Dead Sea Scrolls in Context, v. 2, Brill, 2011, pp. 790-2.

3 Comments to “Selz: Tracking Gilgamesh Throughout History and Literature”