Eco: From Adam to Confusio Linguarum, 2 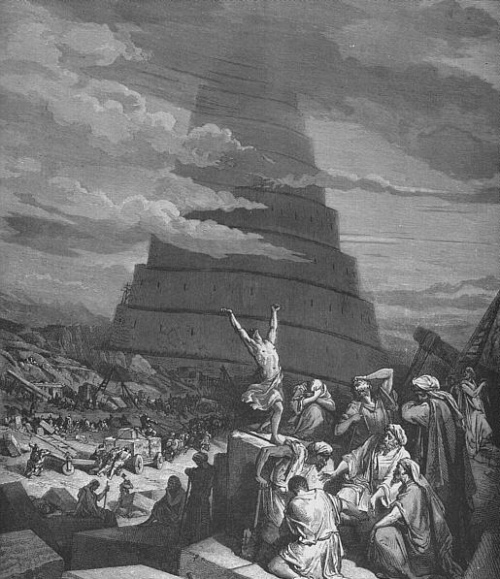 Gustav Doré (1832-83), The Confusion of Tongues (1865-8), engraving, held in a private collection. This work is in the public domain in its country of origin and other countries and areas where the copyright term is the author’s life plus 100 years or less.

“Told in this way, however, the story is still incomplete. We have left out Genesis 10. Here, speaking of the diffusion of the sons of Noah after the Flood, the text states of the sons of Japheth that, “By these [sons] were the isles of the Gentiles divided in their lands; every one after his tongue, after their families, in their nations” (10:5).

This idea is repeated in similar words for the sons of Ham (10:20) and of Shem (10:31). How are we meant to interpret this evident plurality of languages prior to Babel?

The account presented in Genesis 11 is dramatic, able to inspire visual representations, as is shown by the further iconographic tradition.

The account in Genesis 10 is, by contrast, less theatrical. It is obvious that tradition focused on the story in which the existence of a plurality of tongues was understood as the tragic consequence of the confusion after Babel and the result of a divine malediction.

Where it was not neglected entirely, Genesis 10 was reduced to a sort of footnote, a provincial episode recounting the diffusion of tribal dialects, not the multiplication of tongues.

Thus Genesis 11 seems to possess a clear and unequivocal meaning: first there was one language, and then there were–depending on which tradition we follow–seventy or seventy-two.

It is this story that served as the point of departure for any number of dreams to “restore” the language of Adam. Genesis 10, however, has continued to lurk in the background with all its explosive potential still intact.

Every so often in the course of our story, someone will oppose Genesis 10 to Genesis 11. Depending on the period and the theologico-philosophical context, the results will be more or less devastating.”