Nakamura: Humans Make Up the gods Who Make Them

“The creation of powerful supernatural beings in diminutive clay form mimes the divine creation of being from primordial clay. But this figurine work enacts an idealized relation between the human and divine such that the mimetic act establishes a double appropriation.

Through mimesis, the āšipu appropriates the divine power of creation by making copies of protective beings that assume the powers of the original. In addition, his material relation to the figurine manifested in relative size also embodies a divine relation to humans. 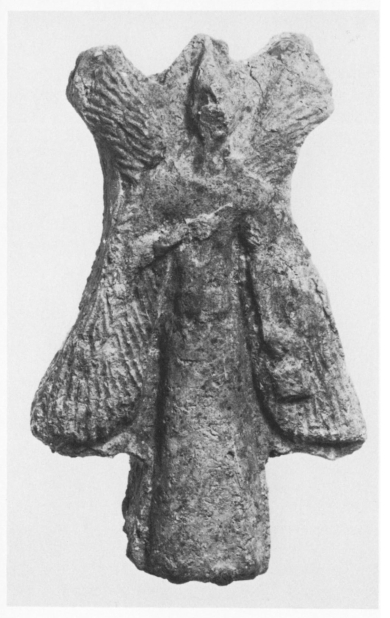 This cunning reversal amounts to a self-realizing request for protection made possible by the exposure of a secret: that humans make up the gods who make them.

But this exposure finds certain cover in the opacity of the figurine object, which presents itself to the world as a small, doll-like object made of clay, as a king in beggar’s clothes, as it were.

This “auto-affection” enacted through the creation of objects galvanizes power in mimesis as idealized repetition; in Derrida’s words, “[it] gains in power and in its mastery of the other to the extent that its power of repetition idealizes itself ” (1974:166).

And repetition does not produce the same; rather it magnifies difference masked by the similarity it bears to the original. The miniature figurine then provides a locus for the human enactment of a variety of desires and actions that animate the being it represents; in the Neo-Assyrian case, humans control, protect, contain, and command powerful deities and spirits in this spatial and material production of simulacra.

The scale of the miniature invites activities of play and fantasy. According to Roger Caillois, play, as “pure form, activity that is an end in itself, rules that are respected for their own sake, constitutes an area of “limited and provisional perfection,” in which one is the master of destiny” (2001:157).

In the realm of play, humans are free to “master” any relation, being, reality, or power, immune to any apprehension or consequence regarding their actions; this is especially true when such play is circumscribed by human–object relations. The tableau of the miniature solicits a relation of human mastery through an idiom of play that thrives on transgressive maneuvers of inversion and appropriation.”