“With the Semitic domination of Sargon of Accad, however, Babylonian astronomy entered upon a new phase. To him, tradition ascribed the compilation of the standard work on Babylonian astronomy and astrology called the Observations of Bel, and afterwards translated into Greek by Berossos (Editorial note: a book by Johannes Haubold, et al, The World of Berossos, 2013, which presents material presented at an academic conference in 2010, can be downloaded in its entirety. Our gratitude is owed to Harrassowitz Verlag of Wiesbaden. A faster and shorter resource is Robert Drews, “The Babylonian Chronicles and Berossus,” Iraq, 1975, which is synopsized in the ensuing three posts).

But the edition of the work which we possess presupposes a much later date. Aries, and not Taurus, marks the beginning of the year, and the text contains references to political and geographical facts, some of which are probably not much older than the age of Assur-bani-pal. This is explained by the nature of the work. It was not so much a treatise on astronomy, as on the pseudo-science that had been evolved out of the observations of astronomy.

The Chaldean priests had grasped but imperfectly the idea of causation; their fundamental assumption was “post hoc, ergo propter hoc;” when two events had been noticed to happen one after the other, the first was the cause of the second. Hence their anxiety to record the phenomena of the heavens and the occurrences that took place after each; if a war with Elam had followed an eclipse of the sun on a particular day, it was assumed that a recurrence of the eclipse on the same day would be followed by a recurrence of a war with Elam. 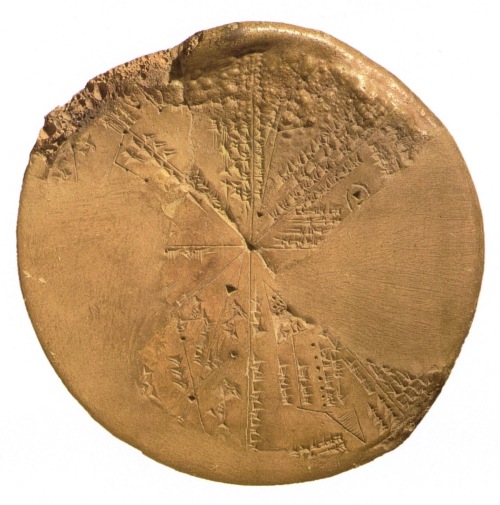 Assyrian star planisphere found in the library of the Assyrian king Ashurbanipal (Aššur-bāni-apli – reigned 668-627 BCE) at Nineveh.
The function of this unique 13-cm diameter clay tablet, in which the principal constellations are positioned in eight sectors, is disputed. The texts and drawings appear to be astro-magical in nature.
Kuyunjik Collection, British Museum, K 8538 [= CT 33, 10]. London.
http://www.staff.science.uu.nl/~gent0113/babylon/babybibl.htm

In this way a science of astrology was created whose students could foretell the future by observing the signs of the sky.

It is obvious that a work whose object was to connect astronomical observations with current events must have been constantly undergoing alteration and growth. New observations would from time to time be introduced into it, sometimes causing confusion or even omissions in the text. There are instances in which we can detect the presence of observations placed side by side, though belonging to very different periods, or of older records which have been supplemented by the calculations of a later age.

In their present form, therefore, the Observations of Bel have to be used with caution if we would argue from them to the beliefs and practices of early Babylonia.

But the astrological science, or pseudo-science, which underlies the whole work, shows that even in its earliest form it was a product of the Semitic epoch. Between the attitude of mind presupposed by this pseudo-science, and the attitude of mind presupposed by the magical texts and Shamanistic cult of Sumerian Chaldea, there lies an impassable gulf. 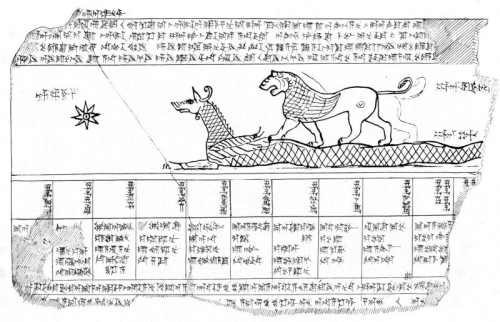 This illustration is from a page on Babylonian astronomy hosted by the science faculty of the Mathematical Institute of Utrecht University.
http://www.staff.science.uu.nl/~gent0113/babylon/babybibl_fixedstars.htm
A dedicated work assessing the influences of Chaldean astrology on later Greek and Roman knowledge can be found in Franz Cumont, Astrology and Religion Among the Greeks and Romans, 1912.
Full text available for download at several locations on the net, including:
http://theosnet.net/dzyan/miscpubs/Astrology_and_Religion.pdf

According to the latter, events are brought about by the agency of the innumerable spirits of earth and air, and can be controlled by the spells and exorcisms of the sorcerer; according to the astrologer of Sargon’s court, they are natural occurrences, caused and determined by other natural occurrences which can be discovered and noted by the observer. Out of the astrologer the astronomer could be born; between science and sorcery there can be only an eternal feud.

It does not follow, however, that the pre-Semitic population of Chaldea took no notice of the phenomena of the sky. Unusual phenomena, such as an eclipse, must necessarily excite the attention of superstitious and half-civilized tribes; and the formation of a calendar, the invention of the Zodiac, and the naming of the principal constellations, show that a rudimentary astronomy was already in existence.

Indeed, the Observations of Bel not only contain technical terms of Accadian origin, but embody notices of phenomena like eclipses which presuppose a long period of earlier observations.

Unless such observations had existed, even the first compilation of the work would have been impossible. It was astrology, not the rudiments of astronomy, for which the Semites of Babylonia can claim the entire credit.”