“Magic has always had a role to play in Islamic society. Its use has often been condemned by religious scholars, yet the efficacy of magic has never been contested; the early tenth-century religious scholar al-Ash’arī (d. 324/936), to take but one example, wrote in his dogmatical work Ibána (p. 19): «(…) and we belíeve that there are magicians and magic in this world, and that magic is an existing entity in this world».

During the Middle Ages magic always kept this role not only among common people but also among the learned. In the tenth century the Brethren of Purity wrote extensively on magic in their Rasā’il (esp. IV:283- 335) and magical elements can easily be detected from a variety of sources, including the biography of the prophet Muhammad.

One of the learned authors who was very much interested in magic and esoterica was the early tenth-century Abū Bakr Ibn Wahshiyya (alive in 318/930), the author or translator of many «Nabatean» books, among them the famous al-Filāha an-Nabatiyya, «the Nabatean Agriculture>.

The Nabatean books (also called the Nabatean corpus in the following) of Ibn Wahshiyya claim to be translations from «ancient Syriac». Both the author and his book, mainly Filāha, have been controversial since the nineteenth century, when the corpus was first enthusiatically received in Europe as deriving from the ancient Babylonians, though subsequently exposed as a forgery.

There is no need to cover once again the history of the controversy, and it is enough to draw attention to the present situation. The majority of scholars have more or less ignored both Ibn Wahshiyya and his works, whereas a few, especially Toufic Fahd, have courageously but not always coherently defended the authenticity of Filāha, not as a remnant of ancient Babylonian literature but as an authentic Arabic translation of a fourth/fifth century AD pseudepigraphic Aramic text.

The other works of Ibn Wahshiyya have received extremely scant attention, despite their obvious importance as a source for the almost unknown rural and parochial life in Iraq. 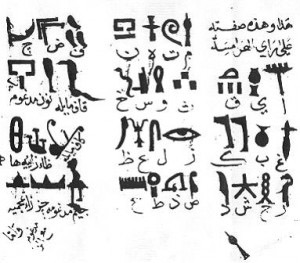 In the final analysis the question of the texts’ exact provenence must still be left open, though the lack of any signs of translation in the texts as well as the absence of similar genuine texts in Aramaic argues against their authenticity.

Nevertheless, we must make a difference between the works and their material. Whether the works of the Nabatean corpus are authentic or not, that is whether they indeed derive from complete books written in Syriac or some other form of Aramaic or not, there are features that speak in favour of the authenticity of (some of) the material in these books.

First, there are several prayers in Aramaic, in Arabic script, in, eg., Sumūm, which clearly sound Aramaic; their present corruption is most probably due to later copyists. Ibn Wahshiyya himself could hardly have composed these prayers, so they must have come to him in either written or oral form.

Second, the local setting is given accurately, which proves that Ibn Wahshiyya did know the area he was speaking about and thus there is nothing ínherently improbable in presuming that he had access to local traditions.

Third, and most importantly, much of the material has to be genuine as parallels can be found in Babylonian and Assyrian sources—I am referring to the Tammūz/Dumuzi description in particular—which proves that it cannot be a product of Muslim fiction but a report of practices in semipagan rural areas.

Some of these descriptions are more detailed and accurate in the works of Ibn Wahshiyya than in any of the other extant Muslim sources, which makes it improbable that Ibn Wahshiyya could have found them in the Arabic literature at his disposal.

Thus they must stem from a living tradition—although obviously an already dying one.”