Submarine of Alexander the Great

“The Arab historian Mas’ûdî has preserved (see Les Prairies d’Or, ed. B. de Meynard and Pavet de Courteille, Paris, 1861, tom. ii. p. 425 ff) a curious legend of the talismans which were employed by Alexander the Great to protect the city of Alexandria whilst it was being built, and as the legend is of Egyptian origin, and dates from a period not greatly removed from that in which the Metternich stele was made, it is worthy of mention.

When the foundations of the city had been laid, and the walls had begun to rise up, certain savage animals came up each night from the sea, and threw down everything which had been built during the day; watchmen were appointed to drive them away, but in spite of this each morning saw the work done during the previous day destroyed.

After much thought Alexander devised a plan whereby he might thwart the sea monsters, and he proceeded to carry it into effect.

He made a box ten cubits long and five cubits wide with sides made of sheets of glass fastened into frames by means of pitch, resin, etc. 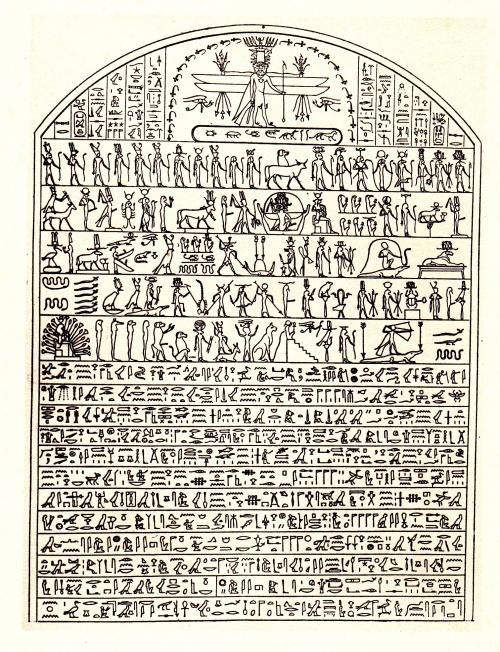 In this box Alexander placed himself, together with two skilful draughtsmen, and having been closed it was towed out to sea by two vessels; and when weights of iron, lead, and stone had been attached to the under part of it, it began to sink, being guided to the place which Alexander wished it to reach by means of cords which were worked from the ships.

When the box touched the bottom of the sea, thanks to the clearness of the glass sides and the water of the sea, Alexander and his two companions were able to watch the various marine monsters which passed by, and he saw that although they had human bodies they had the heads of beasts; some had axes, some had saws, and some had hammers, and they all closely resembled workmen.

As they passed in front of the box Alexander and his two draughtsmen copied their forms upon paper with great exactness, and depicted their hideous countenances, and stature, and shape; this done, a signal was made, and the box was drawn up to the surface.

As soon as Alexander reached the land he ordered his stone and metal workers to make reproductions of the sea monsters according to the drawings which he and his friends had made, and when they were finished he caused them to be set up on pedestals along the sea-shore, and continued his work of building the city.

When the night came, the sea monsters appeared as usual, but as soon as they saw that figures of themselves had been put up on the shore they returned at once to the water and did not shew themselves again.

When, however, the city had been built and was inhabited, the sea monsters made their appearance again, and each morning a considerable number of people were found to be missing; to prevent this Alexander placed talismans upon the pillars which, according to Mas’ûdî, were there in his day.

Each pillar was in the shape of an arrow and was eighty cubits in height, and rested upon a plinth of brass; the talismans were placed at their bases, and were in the form of figures or statues of certain beings with suitable inscriptions, and as they were put in position after careful astronomical calculations had been made for the purpose we may assume that they produced the effect desired by the king.”