“Composite creatures are found on various cosmic levels. For that reason, Mesopotamian Cosmic Geography, by Wayne Horowitz (1998; rev. 2011), has informed the present study, especially with regard to the “Babylonian Map of the World” and Enuma Elish texts, which mention a significant number of mixed beings found in the Neo-Babylonian iconographic repertoire. 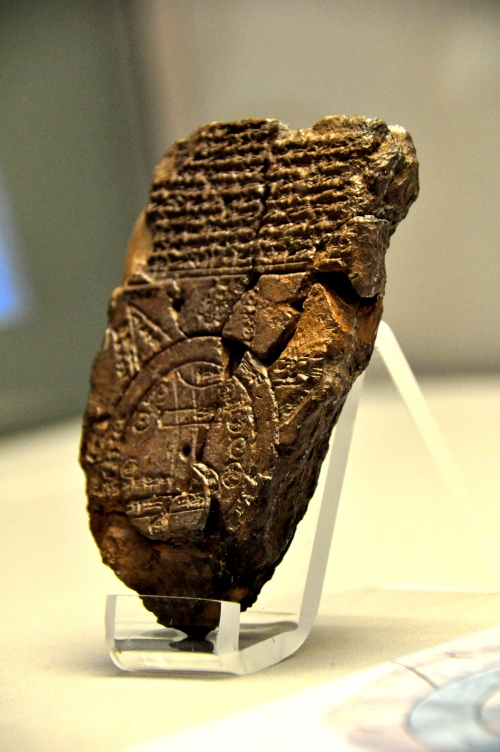 This cuneiform inscription and map of the Mesopotamian world depicts Babylon in the center, ringed by a global ocean termed the “salt sea.” The map portrays eight regions, though portions are missing, while the text describes the regions, and the mythological creatures and legendary heroes that live in them. Sippar, Babylonia, 700 – 500 BCE.
Photo by Osama Shukir Muhammed Amin. Licensed under the Creative Commons: Attribution-NonCommercial-ShareaAlike license.
http://www.ancient.eu/image/2287/

Regarding Sumero-Babylonian religion in ancient Mesopotamia, two foundational studies are Wilfred Lambert’s essay on “The Historical Development of the Mesopotamian Pantheon: A Study in Sophisticated Polytheism” (1975) and Thorkild Jacobsen’s trail-blazing book titled The Treasures of Darkness (1976). 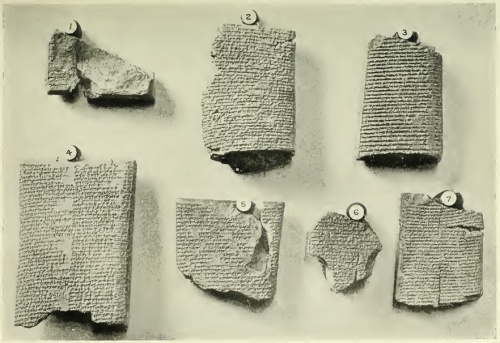 Enuma Elish means “when above”, the two first words of the epic.
This Babylonian creation story was discovered among the 26,000 clay tablets found by Austen Henry Layard in the 1840’s at the ruins of Nineveh.
Enuma Elish was made known to the public in 1875 by the Assyriologist George Adam Smith (1840-76) of the British Museum, who was also the discoverer of the Babylonian Epic of Gilgamesh. He made several of his findings from excavations in Nineveh.
http://www.creationmyths.org/enumaelish-babylonian-creation/enumaelish-babylonian-creation-3.htm

(Wilfred G. Lambert, “The Historical Development of the Mesopotamian Pantheon: A Study in Sophisticated Polytheism,” in Unity in Diversity: Essays in the History, Literature, and Religion of the Ancient Near East (ed. Hans Goedicke and J. J. M. Roberts; Baltimore: Johns Hopkins University Press, 1975), pp. 191-200.)

Since these publications appeared, still others have contributed to a greater understanding of the complexities of Mesopotamian religion, with its thousands of named gods and demons, but a comprehensive, systematic understanding still eludes modern scholarship.

Of particular importance to the methodological framework of the present research are the works of two scholars, Chikako E. Watanabe and Mehmet-Ali Ataç.

Watanabe’s Animal Symbolism in Mesopotamia: A Contextual Approach (2002), drawing upon her doctoral dissertation (University of Cambridge, 1998), aims “to examine how animals are used as ‘symbols’ in Mesopotamian culture and to focus on what is intended by referring to animals in context.” 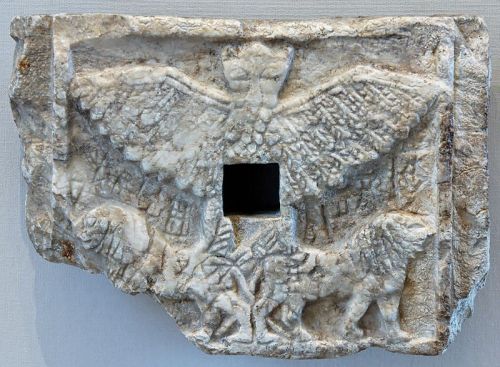 The scope of her investigation is limited to the symbolic aspects of two natural animals, the lion and bull, and two composite creatures, the Anzu bird and the horned lion-griffin. Watanabe’s narrow but deep analysis provides an excellent paradigm for study of Mesopotamian iconographic creatures in general.

Watanabe maintains that “the best way to interpret meanings belonging to the past is to pay close attention to the particular contexts in which symbolic agents occur.”

She does this through application of an approach known as the interaction view of metaphor, also called the theory of metaphor, developed by Max Black.

According to Watanabe, this approach aims to interpret the meanings of objects, whether occurring in figurative statements or iconographic representations, from within the contexts of their original functions, “by examining their internal relationships with other ideas or concepts expressed within the same contextual framework.”

As she points out, “the treatment of symbolic phenomena on a superficial level” does “not explain the function of symbolism.”

Watanabe observes that the names of animals mentioned in ancient texts generally carry meaning beyond references to the natural creatures themselves.

When a creature is repeatedly found in a specific context, this context provides a link or clue to the meaning attached to it.

Watanabe’s treatment of composite creatures, the Imdugud/Anzu and the horned lion-griffin, in Chapter 5 of her work provides a case study for analysis of similar mixed beings.

Each composite creature is derived from two or more species, with each animal part embodying a concept associated with the given animal’s natural behavior. 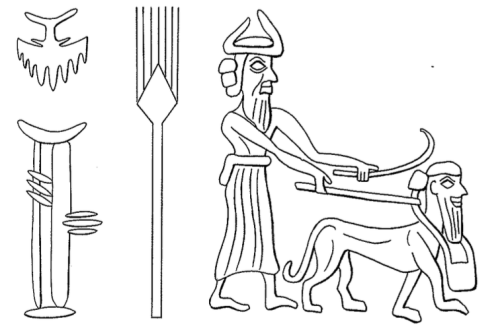 This illustration of a god walking his human-headed lion lacks the wings on the lion mentioned in Watanabe’s example. A detail from a cylinder seal of the Akkadian period, this exemplar is from Jeremy Black and Anthony Green, Gods, Demons & Symbols of Ancient Mesopotamia, 1992, p. 39.

Thus, for instance, a winged, human-headed lion possesses attributes that include human intelligence, leonine power and ferocity, and eagle wings to provide swiftness and access to the realm of the sky.

Watanabe finds that “the study of these animals provides a model for the way in which the characteristics of two or more animals are integrated into one animal body, as a result of which multiple divine aspects, perceived in one deity, are effectively conveyed by a single symbolic animal.”

Wings are a frequent physical component of Mesopotamian composite creatures. Watanabe maintains that when animals that are ordinarily wingless are portrayed with wings, the intent in some cases may be to represent the constellation that is symbolized by that creature.

Constellations of stars were understood by the Babylonians as images of “earthly objects projected onto the evening sky.”

Additionally, wings could personify the abstract concepts of wind or the flying of time. While wings often belong to the realm of the gods, they can also be associated with night, death, and evil.”

Melvin: On the Role of Divine Counsel

“Elements of civilization are also attributed to the semi-divine hero, Gilgamesh. The opening lines of the Epic of Gilgamesh celebrate his great wisdom:

The text goes on to describe Gilgamesh’s achievements in building the edifices of the city of Uruk, especially its wall. Here the text highlights the great wisdom required for such construction by ascribing the foundations of the city wall to the wisdom of the “Seven Sages” (apkallus). 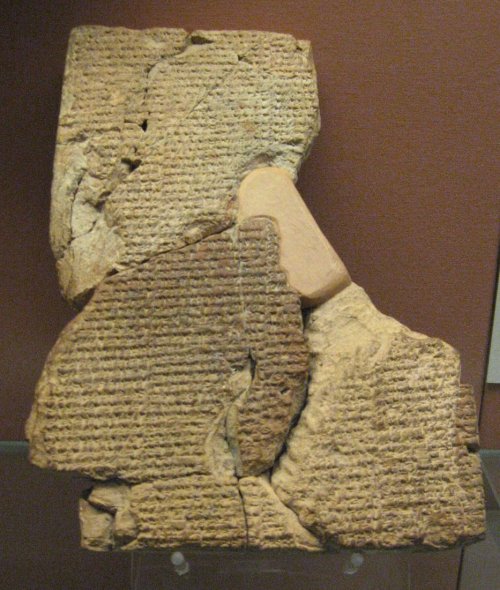 Cuneiform tablet with the Atrahasis Epic.
Babylonian, about 17th century BCE.
From Sippar, southern Iraq.
A version of the Flood story.
The story outlines the structure of the universe according to Babylonian beliefs. Heaven is ruled by the god Anu, the earth by Enlil and the subterranean sweet water by Enki. The text then explains how the minor gods work in the fields but then rebel. As a result, humans are made from clay, saliva and divine blood to act as servants of the gods.
This does not prove a perfect solution, as the humans reproduce and their noise disturbs Enlil’s sleep. He decides to destroy them with plague, famine, drought and finally a flood.
However, each time Enki instructs one of the humans, Atrahasis, to survive the disasters. The god gives Atrahasis seven days warning of the flood, and he builds a boat, loads it with his possessions, animals and birds. He is subsequently saved while the rest of humankind is destroyed.
However, the gods are unhappy as they no longer receive the offerings they used to.
There is a gap in the text at this point but it does end with Atrahasis making an offering and Enlil accepting the existence and usefulness of humans.
Copies of this story have survived from the seventeenth to the seventh century BCE showing that it was copied and re-copied over the centuries. This is the most complete version. There are clear similarities between this Flood story and others known in Mesopotamian literature, for example, the Epic of Gilgamesh.
T.C. Mitchell, The Bible in the British Museum (London, The British Museum Press, 1988)
S. Dalley, Myths from Mesopotamia (Oxford University Press, 1991)
W.G. Lambert and A.R. Millard, Atra-hasis (Oxford, Clarendon Press, 1969)
http://www.britishmuseum.org/explore/highlights/highlight_objects/me/c/cuneiform_the_atrahasis_epic.aspx

Moreover, within the epic, the greatest achievements of Gilgamesh are the building of the wall of Uruk and the wisdom he obtained and passed on to subsequent generations.

The source of this wisdom is his encounter with the divinized Flood hero, as the Sumerian text The Death of Bilgames indicates:

“…you reached Ziusudra in his abode! The rites of Sumer, forgotten there since distant days of old, the rituals and customs—it was you brought them down to the land. The rites of hand-washing and mouth-washing you put in good order, [after the] Deluge it was you made known all the tasks of the land […].”

Thus, Gilgamesh acts as a mediating figure between the divine source of the knowledge necessary for aspects of civilization and the people of Sumer. The source of his divine knowledge is the divinized Flood hero, who had in turn received his knowledge from Enki / Ea, as well as perhaps his divine mother, Ninsun. 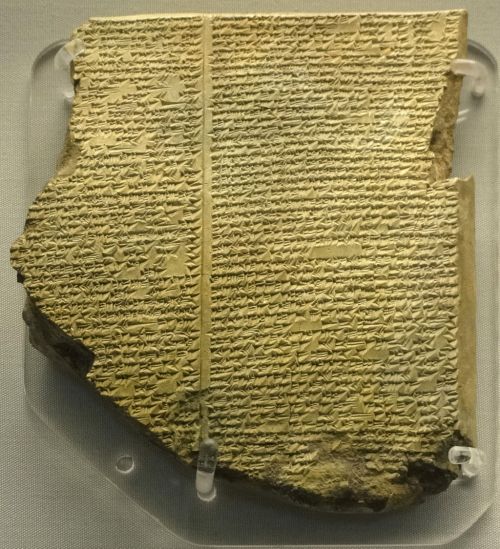 (In The Death of Bilgames, Enki, following the recounting of Gilgamesh’s great achievements and wisdom, states, “And now we look on Bilgames: despite his mother we cannot show him mercy!” (M 78–79 [George, The Epic of Gilgamesh, 199 (sic)]).

They engage in a battle of wits in which the Lord of Aratta issues various seemingly impossible challenges for Enmerkar, and in each case, Enmerkar succeeds by receiving divine inspiration from a deity.

Thus, for example, when the Lord of Aratta challenges Enmerkar to carry grain from Uruk to Aratta in a net, he receives the solution from the grain goddess, Nidaba, who “open[s] for him her ‘Nidaba’s holy house of understanding.’”

By his reception of divine knowledge, Enmerkar is able not only to meet the Lord of Aratta’s challenges, he also invents several new technologies (e.g., writing) along the way.

Because of the crucial role divine counsel plays in Enmerkar’s cultural achievements, his accomplishments become, indirectly, the work of the gods in bringing about human civilization.”

David P. Melvin, “Divine Mediation and the Rise of Civilization in Mesopotamian Literature and in Genesis 1-11,” Journal of Hebrew Scriptures, 2010, pp. 4-5.

Izre’el: Adapa and the South Wind as Mythos

Furthermore, the myth is the second part of a longer narrative, the first part of which describes the time just following the deluge and describes the feeding of the gods and the organization of mankind.

The discovery of the myth of Adapa and the South Wind immediately attracted wide attention. Its ideology and its correspondence to the intellectual heritage of Western religions precipitated flourishing studies of this myth, both philological and substantive. 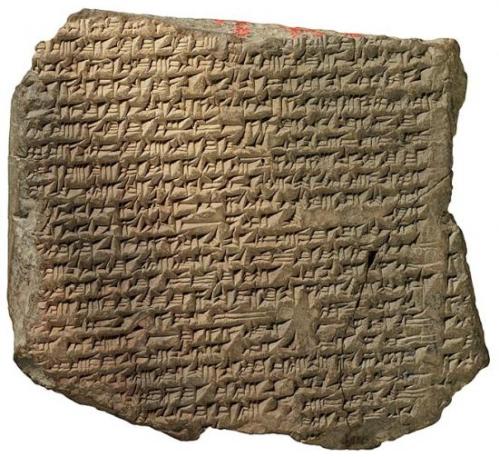 This is MLC 1296, an Akkadian fragment of the Adapa Myth in the collection of the Morgan Library and Museum.
http://corsair.themorgan.org/cgi-bin/Pwebrecon.cgi?BBID=215815

Picchioni’s monograph marked a turning point in the Assyriological study of the myth and became the standard edition of the myth. There are several reasons for this: first, it summarized the diverging views published in the secondary literature.

However, in spite of comprehensive treatment of the personae and symbols of the myth, Picchioni’s treatment of the narrative itself was remarkably brief (cf. Ella 1983). It is precisely with this in mind that I am publishing the present study: I am unveiling the myth of Adapa and the South Wind as mythos, as story. To do this, I will analyze the underlying concepts through extensive treatment of form.

First I offer an edition of the extant fragments of the myth, including the transliterated Akkadian text, a translation, and a philological commentary. As the reader will see, I consider language the salient and crucial part of any textual treatment, especially one that analyzes the overt and covert meanings of a myth. 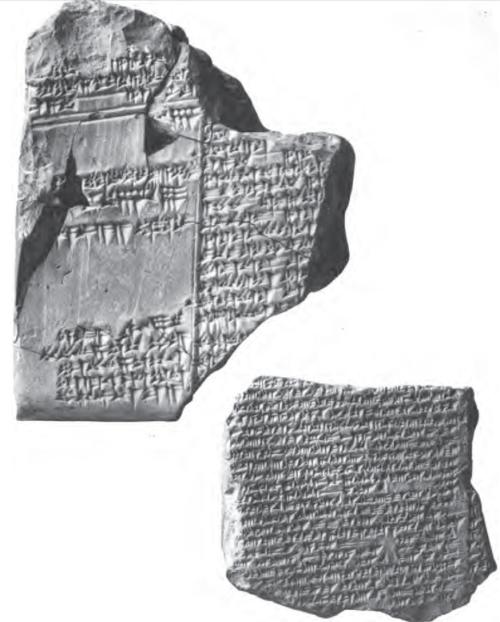 I cannot overemphasize the need for thorough philological and linguistic analysis before discussing meaning, even though some interpretations are merely the result of context-realizations.

The analysis of poetic form that follows will then lead to analyzing the myth as a piece of literature and to uncovering its meaning—or rather, meanings.

This study therefore marks another phase in the long, extensive, and never-ceasing research into this abysmal Mesopotamian myth. Being just one of many human beings allured to and intrigued by this tale told in ancient times to a more understanding audience than ours, I wish to share with my own audience both my interpretation and my impression of this particular myth, as well as the methodology that I have adopted for my enquiry.

Within these confines, I hope that this study will have something to offer to the more general study of the Mesopotamian, especially the Akkadian, mythological texts.”

Schlomo Izre’el, Adapa and the South Wind: Language Has the Power of Life and Death, Eisenbrauns, 2001, pp. 7-8.