Lenzi: On the Restoration of the Temples

“There is also some evidence that the Seleucids, at least at times, accommodated themselves to Mesopotamian traditions. Perhaps the most famous example of this is Antiochus I’s royal inscription of 268 BCE.

In this archaizing inscription Antiochus I appropriated the traditional language of kingship, utilized throughout earlier Mesopotamian royal inscriptions, in order to present his own rule in the linguistic garb of an indigenous king. 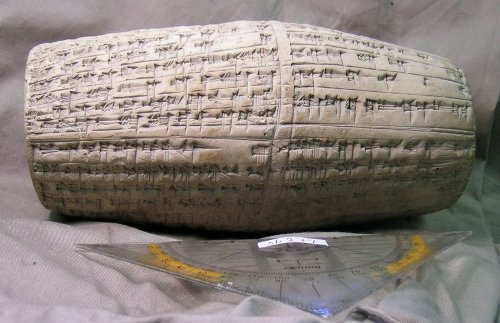 The Cylinder of Antiochus I Soter from the Ezida Temple in Borsippa (Antiochus Cylinder) is an historiographical text from ancient Babylonia.
It describes how the Seleucid crown prince Antiochus, the son of king Seleucus Nicator, rebuilt the Ezida Temple.
The cuneiform text itself (BM 36277) is now in the British Museum.   The document is a barrel-shaped clay cylinder, which was buried in the foundations of the Ezida temple in Borsippa.
The script of this cylinder is inscribed in archaic ceremonial Babylonian cuneiform script that was also used in the well-known Codex of Hammurabi and adopted in a number of royal inscriptions of Neo-Babylonian kings, including. Nabopolassar, Nebuchadnezzar and Nabonidus (cf. Berger 1973).
The script is quite different from the cuneiform script that was used for chronicles, diaries, rituals, scientific and administrative texts.
Another late example is the Cyrus Cylinder, commemorating Cyrus’ capture of Babylon in 539 BCE (Schaudig 2001: 550-6). This cylinder, however, was written in normal Neo-Babylonian script.
The Antiochus Cylinder was found by Hormuzd Rassam in 1880 in Ezida, the temple of the god Nabu in Borsippa, in what must have been its original position, “encased in some kiln-burnt bricks covered over with bitumen” in the “doorway” of Koldewey’s Room A1: probably this was built into the eastern section of the wall between A1 and Court A, since the men of Daud Thoma, the chief foreman, seem to have destroyed much of the brickwork at this point.
Rassam (1897: 270) mistakenly records this as a cylinder of Nebuchadnezzar II (Reade 1986: 109). The cylinder is now in the British Museum in London.   (BM 36277).
http://www.livius.org/cg-cm/chronicles/antiochus_cylinder/antiochus_cylinder1.html

Even if we were to interpret all of these Seleucid activities as exploiting indigenous traditions to further their own rule, we should probably only conclude from this that the Seleucids were doing what a long line of earlier Mesopotamian rulers—indigenous or otherwise—had done.

But, we need not imagine the Seleucid appropriation or support of Mesopotamian institutions as a simple one-way, top-down mechanism of exploitation. There may be indications that some of the local elites encouraged the rulers to adopt Mesopotamian ways, either explicitly or implicitly.

For example, several historians have suggested that Berossus’ Babylonaica was explicitly written to encourage the foreign Seleucids, especially Antiochus I, to sympathize with and support Mesopotamian traditions.

The Scheil dynastic tablet or “Kish Tablet” is an ancient Mesopotamian cuneiform text containing a variant form of the Sumerian King List.
The Assyriologist Jean-Vincent Scheil purchased the Kish Tablet from a private collection in France in 1911. The tablet is dated to the early 2d millennium BCE.
https://en.wikipedia.org/wiki/Scheil_dynastic_tablet

(See Stanley Mayer Burstein, The Babyloniaca of Berossus (Sources from the Ancient Near East I/5; Malibu: Undena Publications, 1978), 5-6, who believes Berossus’ departure for Cos late in his life may indicate Berossus’ disappointment with the Seleucid policies toward Babylon.

But see Amélie Kuhrt, “Berossus’ Babylonaika and Seleucid Rule in Babylonia,” in Hellenism in the East, 32-56, who contends Berossus may have written in order to provide the Seleucids with local ideological support for their regime, especially in order for them to rebut claims made by Ptolemaic authors such as Manetho and Hecataeus (55-56)).

And recently Paul-Alain Beaulieu has set the Uruk Prophecy within a larger religious agenda and interpreted the enigmatic text as an implicit attempt to persuade Antiochus I to support the Uruk temple, thereby furthering the newly revived cult of Anu and Antu.

(He writes, “The Uruk Prophecy is therefore a rewriting of historical material with the purpose of vindicating the establishment (presented as the reestablishment) of a new cult (i.e. the cult of Anu as reorganized in the third century by the priesthood of the Bīt Rēs), to present the ruler who will foster this cultic revival (i.e. one of the contemporary Seleucid rulers [which Beaulieu later identifies as Antiochus I]) as a new Nebuchadnezzar, to obliquely suggest that his father was a neglectful, and therefore malevolent, ruler (as Nabopolassar had been), and to predict an everlasting rule for his dynasty, even a rule of divine character” (Beaulieu, “Uruk Prophecy,” 49).”