Eco: A Dream that Refused to Die 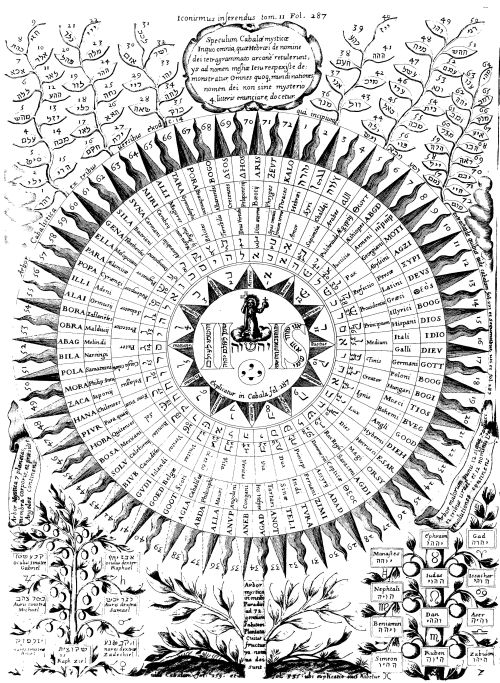 Athanasius Kircher (1602-80), the Christian interpretation of the Kabbalah and the mystical names of God, Oedipus Aegyptiacus, tom. 2, vol. 1, 1652-4, p. 287. John Mark Ockerbloom curated an entry for all three volumes of this work at the University of Pennsylvania libraries. This illustration courtesy of Stanford University. This work is in the public domain in its country of origin and other countries and areas where the copyright term is the author’s life plus 100 years or less.

“Even faced with the results of the research of comparative linguistics, however, monogenetic theories refuse to give up the ghost. The bibliography of belated monogeneticism is immense. In it, there is to be found the lunatic, the crank, the misfit, the bizarre mystic, as well as a number of students of unimpeachable rigor.

In 1850, for example, the Enlightenment notion of a language of action received a radically monogenetic reading in the Dactylologie et language primitif restitués d’apres les monuments by J. Barrois.

Assuming that the first language of humanity was a language of action and that this language was exclusively gestural, Barrois sought to prove that even the passages of the Bible which referred to God addressing Adam referred not to speaking in a verbal sense, but instead to a non-verbal, mimed language.

“The designation of the divers animals which Adam made was achieved by means of a special miming which recalled their form, instinct, habit, and qualities, and, finally, their essential properties.” (P. 31).

The first time that an unambiguous reference to verbal speech appears in the Bible is when God speaks to Noah; before this, all references seem vague. For Barrois, this was evidence showing that only slowly, in the immediately antediluvian age, did a phonetic form of language become common.

The confusio linguarum arose out of discord between gestural and spoken language. The primitive vocal language was born closely accompanied by gestures which served to underline its most important words–just as occurs today in the speech of negroes and Syrian merchants (p. 36).

A dactylological language (expressed by the movement of the fingers and deriving from the primitive language of action) was born later, as a form of short-hand support for the phonetic language, when this latter emerged as the dominant form.

As for the everlasting idea of an original Hebrew, we might cite the figure of Fabre d’Olivet, whose La Langue hébraïque restituée, written in 1815, is still a source of inspiration for belated kabbalists today.

He told of a primitive language that no people had ever spoken, of which Hebrew (the Egyptian dialect of Moses) was but the most illustrious offspring. This insight leads him on to the search for a mother tongue in which Hebrew is carefully combed and then subjected to fantastic reinterpretations.

D’Olivet was convinced that, in this language, every phoneme, every single sound, must have its own special meaning. We will not follow d’Olivet as he re-explores this old terrain; it is enough to say that he presents a string of nonsensical etymologies which, though in the spirit of Duret, Guichard and Kircher, are, if anything, even less convincing.

We might, however, provide just one example to show how traces of an original Hebrew mimology can be discovered in a modern language as well. D’Olivet constructed an etymology for the French term emplacement. Place derives from the Latin platea and from the German Platz.

In both these words, the sound AT signifies protection, while the sound L means extension. LAT means, therefore, a “protected extension.” MENT, in its turn, derives from the Latin mens and the English mind.

In this syllable, E is the sign of absolute life, and N stands for reflexive existence. Together, as ENS, they mean “bodily spirit.” M refers to existence at a given point. Therefore, the meaning of emplacement is “la manière dont uno extension fixe et determinée peut être conçue et se presente aux yeux.”

As one critic has put it, Fabre d’Olivet has demonstrated that emplacement means “emplacement” (cf. Cellier 1953: 140; Pallotti 1992).

And yet. No less a figure than Benjamin Lee Whorf took Fabre d’Olivet as the starting point for a series of reflections on the curious subject of “oligosynthesis.”

He was wondering about the possible applications of a science capable of “restoring a possible common language of the human race or [of] perfecting an ideal natural tongue constructed of the original psychological significance of sounds, perhaps a future common speech, into which all our varied languages may be assimilated, or, putting it differently, to whose terms they may be reduced” (Whorf 1956: 12; see also 74-6).

This is neither the first nor the last of the paradoxes in our story: we associate Whorf with one of the least monogenetic of all the various glottogonic hypotheses; it was Whorf who developed the idea that each language was a “holistic” universe, expressing the world in a way that could never be wholly translated into any other language.” 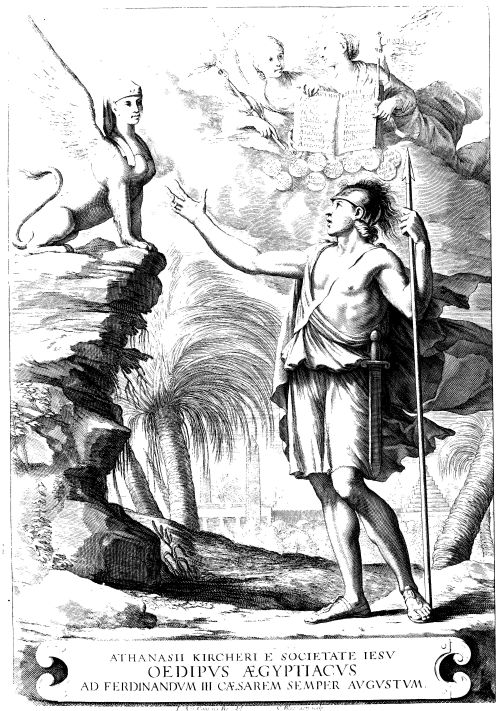 Athanasius Kircher (1602-80), frontispiece from Oedipus Aegyptiacus, tom. 1, Oedipus solving the riddle of the Sphinx. John Mark Ockerbloom posted this curated entry for the entire work, courtesy of the University of Pennsylvania libraries. The Warburg posted a .pdf of the entire 2d volume for free download. This work is in the public domain in its country of origin and other countries and areas where the copyright term is the author’s life plus 100 years or less.

“Although in the eighteenth century a de Brosses or a Court de Gébelin might still persist in his glottogonic strivings, by the time of the Enlightenment, philosophers had already laid the basis for the definitive liquidation of the myth of the mother tongue and of the notion of a linguistic paradise existing before Babel.

The very negative characteristics that philosophers had once attributed to the languages after Babel, Rousseau now discovered in the primitive language itself.

Primitive language spoke by metaphors. That meant that, in a primitive language, words did not, and could not, express the essence of the objects that they named. Reacting in front of an unknown object only instinctively, primitive people were slaves to their passions.

Primitive human beings would, metaphorically and erroneously, call beings slightly bigger or stronger than them giants (ch. 3). Such a primitive language was less articulated, closer to song, than a properly verbal language.

It was replete with synonyms to express a single entity in its differing aspects and relations. Furnished with few abstract terms, its grammar was irregular and full of anomalies. It was a language that represented without reasoning (ch. 4).

Furthermore, the very dispersion of peoples after the Flood made research into this original language a vain undertaking (ch. 9). Du Bos, in his Reflexions critiques ur la poésie et sur la peinture (edn: 1764: I, 35) preferred to speak of the language of the age of huts, rather than of the language of origins.

But even this language was not only lost forever: it was radically imperfect. History has begun to assert its rights. A return was impossible, and, in any event, would not have meant a return to a knowledge that was still full and whole.

Concerning the question of the genesis of language, the eighteenth century was divided into two camps; one maintaining a rationalist hypothesis, the other an empirico-sensationalist one.

Many Enlightenment thinkers remained under the influence of Descartes, whose philosophical principles were expressed in semiotic terms by the Grammair (1660) and the Logique (1662) of Port Royal.

Authors such as Beauzée and Du Marsais (both collaborators in the Encyclopédie) postulated a thoroughgoing isomorphism between language, thought and reality. Much of the discussion about the rationalization of grammar moved in this direction as well.

Under the heading “Grammar,” for example, Beauzée wrote that “the word is nothing but a sort of painting [tableau] of which the thought is the original.” Language’s proper function was to provide a faithful copy of the original thought.

Thus, it seemed to follow that “there must be a set of fundamental principles, common to all languages, whose indestructible truth is prior to all those arbitrary and haphazard conditions which have given birth to the various idioms which divide the human race.”

During this same period, however, there flowered another current, which Rosiello (1967) has termed “Enlightenment linguistics.” This was based on Lockean empiricism as it has been developed into the sensationalism of Condillac.

In contradistinction to the Cartesian doctrine of innate ideas, Locke has described the human mind as a blank slate, devoid of figures, which drew its ideas directly from the senses. It is through our senses that we have access to the outside world, and through reflection that we know the workings of our minds.

From these two activities derive all simple ideas, which intelligence later takes up, manipulating them and compounding them into the infinite variety of complex ideas.”