They could, however, have had a different connotation before being adopted into the sages tradition. Although late texts attribute the tradition of sages to early historical times, no iconographic evidence supports such antiquity for the tradition.

“Sometimes animal hybrids … appear to take part in rituals….some types are clearly minor deities, since they wear the horned cap as a mark of their divinity…others may be human. A …winged god, standing or kneeling, holds a bucket and cone … in the scenes of “ritual” centered on the stylized tree. A similar female figure holds a chaplet of beads….A third figure carries a flowering branch, sometimes also a sacrificial (?) goat. Sometimes he wears the horned cap, and even when does not he often has wings. Presumably, therefore, such figures are also non-mortal; they may represent the Seven Sages in human guise.”
From Jeremy Black and Anthony Green, Gods, Demons and Symbols of Ancient Mesopotamia, 1992, pp. 86-8.

This depiction of a fish-apkallū of the parādu-fish type guarded the entrance to the temple of Ninurta at Nimrud.
A fish’s head can be seen on the Apkallu’s head, and its skin hangs down over the back of his body.
It is important to recall that the so-called Seven Sages of Sumeria were apkallū of this type.
Neo-Assyrian era, 865-860 BCE.
From the Temple of Ninurta, Nimrud (ancient Kalhu; Biblical Calah), northern Mesopotamia, Iraq. (The British Museum, London).
Osama Shukir Muhammed Amin FRCP (Glasg)
http://www.ancient.eu/image/2708/

Type 3 first appears on Middle Assyrian seals, and becomes popular in the 9th-7th centuries both in Assyria and Urartu, often in combination with the sacred tree.

Type 2, on the other hand, appears around the same time in Babylonia, and is taken over in Assyria in the 9th-7th centuries.

Type 1 may have begun early in Assyria of the 1st millennium.

As shown above, Assyria is the region where Types 1 and 2 were first found, with extension of Type 1 to Carchemish, and of Types 1 and 3 to West Semitic stamp seals (if they are genuine) and to Urartu, probably all under Assyrian influence. 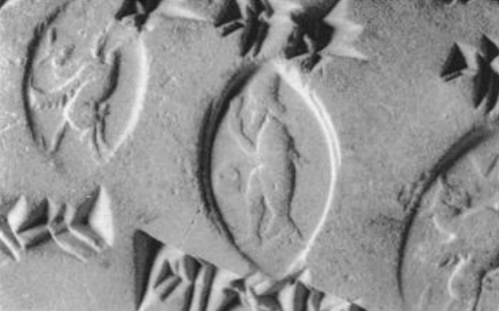 The Babylonian Type 2 is more restricted, moving from Babylonia into Assyria, but from there to Pasargadae in West Iran, and thence into Seleucid art (MCEWAN 1982: nos. 30, 40). 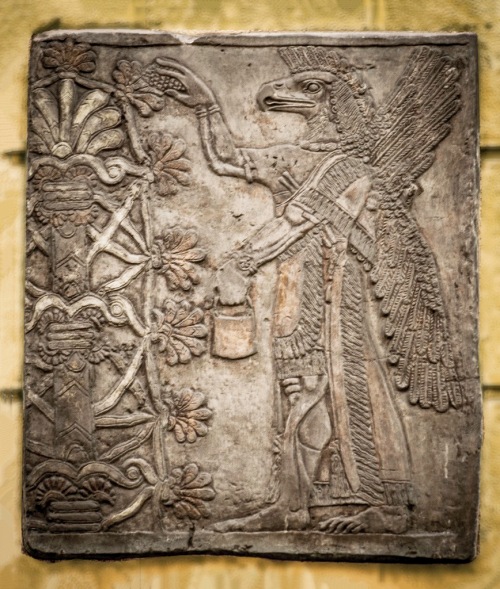 In Neo-Assyrian art these bird-headed “genies,” as they were long described, are now known to be apkallū, “bird-apkallū,” in this case, mixed-feature exorcists and creatures of protection created by the god Ea. They traditionally served as advisors to kings. Their association with sacred trees, as they are often portrayed, remains somewhat perplexing.
This apkallū makes the iconic gesture of exorcism and liberation of sin with the mullilu cone in his raised right hand, and the banduddu water bucket in his left hand.
There are three known types of apkallū: the human, with wings; the avian-headed, with wings, and the fish-apkallū, with carp skin draped over their heads.
https://www.flickr.com/photos/lanpernas2/8606000868/

None are found on boundary stones of the Kassite and post-Kassite periods, nor on sealings from Emar tablets of the 12th century, nor among mid-7th century sculptures from Assurbanipal’s North Palace at Nineveh.

The discrepancy between the written tradition in which the sages represent early antiquity, and the much later chronology of the iconographic evidence is striking. Babylonian and Assyrian traditions seem to have arisen separately. The diffusion of the probably Assyrian types 1 and 3 is different from that of the essentially Babylonian type 2.

The three types of apkallū are portrayed, with the human ummânū at far left, the Nisroc bird-apkallū type in the middle, and the antediluvian purādu-fish type at far right.
The human ummânū is attested in the Uruk List of Kings and Sages, while other references to bird-apkallū are legion, as documented in Wiggermann and other authorities.
The purādu-fish apkallū is principally attested in Berossus, though other authorities confirm them, as well.
The anthropomorphic qualities of the purādu-fish and the Nisroc apkallu remain unexplained, though the eagle is sacred to Enki / Ea.

Types 1 and 3 are closely associated with royal ritual in their scenes with the sacred tree and winged disc, and type 2 is especially associated with sickness, presumably as a healer. These associations make it likely that the bucket and cone, a hallmark of all three types, represent purification and blessing.”