“The three types are identified from ritual texts and labels on figurines, but because the evidence is uncommon and sometimes ambiguous there are uncertainties. Change over time may also account for some difficulties. Some overlap in the iconography with Tiamat’s composite monsters from the theme of the Epic of Creation is possible, as mentioned above.

Single objects such as bucket or sprig may be held by figures who do not share other characteristics with definite sages. WIGGERMANN (1992: 75) identifies Apkallus in scenes in which figures resembling types 1 and 3 carry weapons and attack animals and monsters.

This is not certain, as the bird-headed Apkallu may overlap in form with the Anzu bird in its 1st millennium appearance, and various winged or wingless man-figures may be hero-gods rather than Apkallus. 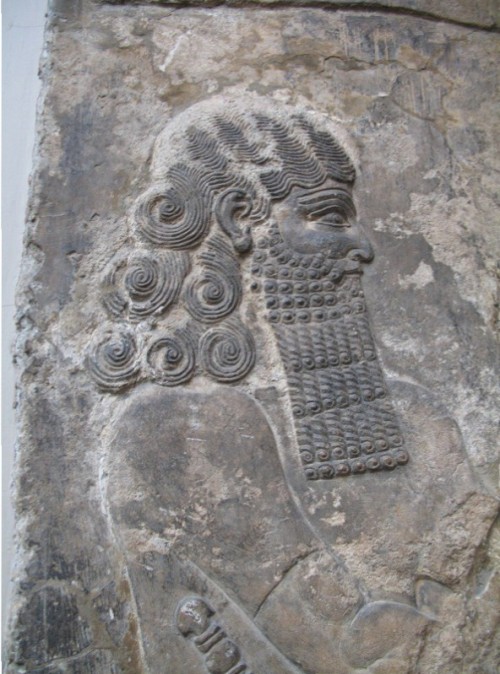 Lahmu, “Hairy,” is a protective and beneficent deity, a first-born son of Apsu and Tiamat.
He and his sister Laḫamu are the parents of Anshar and Kishar, the sky father and earth mother, who birthed the gods of the Mesopotamian Pantheon.
Laḫmu is depicted as a bearded man with a red sash–usually with three strands–and four to six curls on his head. He is often associated with the Kusarikku or “Bull-Man.”
In Sumerian times Laḫmu may have meant “the muddy one”. Lahmu guarded the gates of the Abzu temple of Enki at Eridu.
He and his sister Laḫamu are primordial deities in the Babylonian Epic of Creation-–Enuma Elis.
http://foundfact.com/portfolio-view/lahmu/#!prettyPhoto
http://foundfact.com/library/beings-people-and-gods/page/6/#!prettyPhoto

WIGGERMANN’s identifications are largely accepted (WIGGERMANN/GREEN 1993-97) and are followed here, but disagreement, and a proposal to identify the Lahmu-hero with three pairs of curls as a further type, are suggested by RUSSELL (1991: 312 n. 27; also ORNAN 1993: 60). 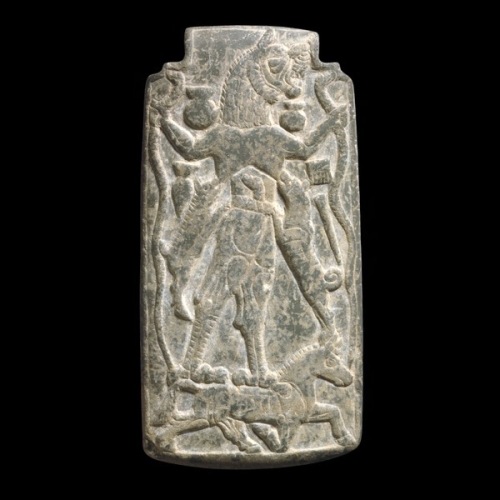 Amulet with a figure of Lamashtu, Mesopotamia, around 800 BC.
A demonic divinity who preys on mothers and children.
This protective image of Lamashtu, a fearsome female divinity of the underworld, was intended to keep evil at bay.
Although she is usually described in modern works as a demon, the writing of her name in cuneiform suggests that in Babylonia and Assyria she was regarded as a kind of goddess.
Unlike the majority of demons, who acted only on the commands of the gods, Lamashtu practised evil apparently for its own sake and on her own initiative. There is a cuneiform incantation on the reverse side of this amulet to frighten her away.
Lamashtu’s principal victims were unborn and new-born babies.
Slipping into the house of a pregnant woman, she tries to touch the woman’s stomach seven times to kill the unborn baby, or she kidnaps the child.
Magical measures against Lamashtu included wearing a bronze head of Pazuzu. Some plaques show a bedridden man rather than a pregnant woman, so in some contexts Lamashtu is considered a bringer of disease.
Lamashtu is described in texts as having the head of a lion, the teeth of a donkey, naked breasts, a hairy body, stained hands, long fingers, long finger nails, and the talons of a bird.
Plaques also show her suckling a piglet and a whelp while she holds snakes in her hands, as in this case.
She stands on her sacred animal, the donkey, which is sometimes shown in a boat, riding through the underworld.
H.W.F. Saggs, Babylonians (London, The British Museum Press, 1995)
J. Black and A. Green, Gods, Demons and Symbols of Ancient Mesopotamia (London, The British Museum Press, 1992)
http://utpress.utexas.edu/index.php/books/blagop#sthash.psbzCU3E.dpuf
http://www.britishmuseum.org/explore/highlights/highlight_objects/me/a/amulet_with_figure_of_lamashtu.aspx

This wingless type is thought by WIGGERMANN (1992: 74f) to be sages before the flood, an identification based on a possible but unfounded connection with the Sumerian names of those early sages. Their human appearance might be more appropriate for mortal sages who lived after the flood, or they may not be sages at all.

Several possible identifications on West Semitic seals cannot be regarded as certain; ORNAN 1993: 60, figs. 11-12 show a kneeling atlantid figure not generally considered to be an Apkallu, and figs. 15, 17, and 18 are dubious because the seal cutting is so skimpy.

The number of wings shown may sometimes be misleading; perspective or spacing may reduce them, and some scholars think a pair of wings shown in side profile represent four. When a single wing is shown (71*, 76* ) a pair can be presumed.

Apkallu type 3, illustration 76, Stephanie Dalley, IDD.
Stephanie Dalley cites illustration 76 as an exemplar “with a long, high crest … with two ringlets falling to the shoulder,” which it indeed does portray.
She also writes, “For jewelry the figure may wear a necklace with seven strands (76*), which may also only be single-stranded with pendants. With my apologies to the professor, I detect no necklace or pendants on this illustration.
This illustration does depict a type 3 Nisroc apkallu in the apparent act of uttering a cry, with a visible tongue, though Professor Dalley does not cite it as an example of that.
Finally, she asserts the “so-called “fish-tail fringe” dangling from the kilt (76*) is not a fish part, and so does not indicate that the type is a fish composite.” With this statement, I am in utter agreement.
This particular illustration, its find site unknown to me, is atypical in other respects. The portrayal of the avian head is perhaps unique, and at variance with the typical versions from the palace walls of Ashurnasirpal II, for example.
The lone curl at the top of the head is unique, I think, as are the curls which Professor Dalley identified above.
In no other example does a nisroc-bird apkallu stand in front of a sacred tree, occluding it from view.
The armlet on this apkallu is unusual, as well, with a design that I have not seen elsewhere.
In all other respects, this depiction of a type 3 bird-headed apkallu is typical, with mullilu cone and banduddu bucket in their customary places.

Similarly, the number of horns shown on crowns of divinity may have been reduced due to considerations of space; they do not appear to distinguish different ranks of sage.

Color may have been used to differentiate between types and eliminate ambiguities, but is not preserved except as occasional traces of paint on foundation figurines.

On Urartian bronzes and on other media, e.g., MERHAV 1991: 144 and 309, a pair of winged, human-headed lions with cone and bucket on each side of a tree of life has a context and attributes identical to that of the Apkallus, but cannot be identified as such without textual support. 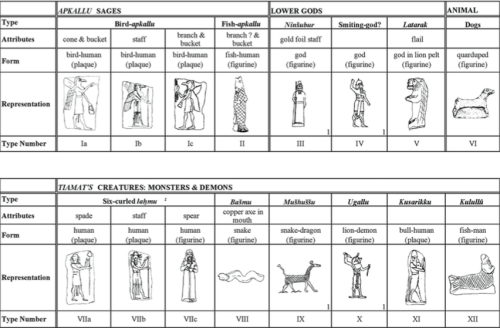 The scorpion-man (Girtablullu), the Kusarikku-bison, and the Ugallu-demon, who all fight in the army of Tiamat in the Epic of Creation, were attributed to the category of Apkallu by ORNAN (1993: 56) on a misunderstanding of GREEN (1984: 83).

The confusion may have validity in some contexts, since sages are said to guard the Tablet of Destinies for Nabu, a modification of a theme from the Epic of Creation. Possible links are mentioned under individual phenotypes above.

Umu-apkallu are portrayed in the top register, tending to a sacred tree.
In the lower register avian-headed apkallu use mullilu cones and banduddu buckets to bless the sacred tree.
John Malcolm Russell, The Writing on the Wall: Studies in the Architectural Context of Late Assyrian Palace Inscriptions, Eisenbrauns, 1999.