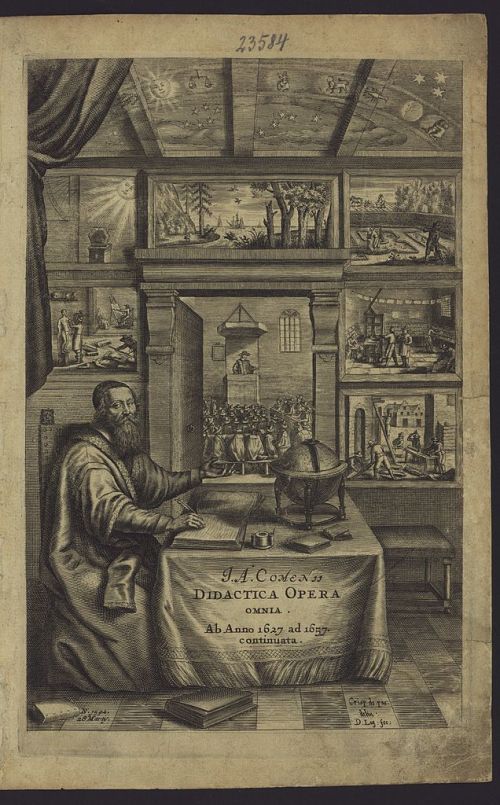 Jan Amos Komensky, or Johann (John) Amos Comenius (1592-1670), from Opera didactica omnia, Amsterdam, 1657. This work is in the public domain in its country of origin and other countries and areas where the copyright term is the author’s life plus 100 years or less.

“Numerology, magic geometry, music, astrology and Lullism were all thrown together in a series of pseudo-Lullian alchemistic works that now began to intrude onto the scene. Besides, it was a simple matter to inscribe kabbalistic terms onto circular seals, which the magical and alchemical tradition had made popular.

It was Agrippa who first envisioned the possibility of taking from the kabbala and from Lull the technique of combination in order to go beyond the medieval image of a finite cosmos and construct the image of an open expanding cosmos, or of different possible worlds.

In his In artem brevis R. Lulli (appearing in the editio princeps of the writings of Lull published in Strasbourg in 1598), Agrippa assembled what seems, at first sight, a reasonably faithful and representative anthology from the Ars magna.

On closer inspection, however, one sees that the number of combinations deriving from Lull’s fourth figure has increased enormously because Agrippa has allowed repetitions.

Agrippa was more interested in the ability of the art to supply him with a large number of combinations than in its dialectic and demonstrative properties. Consequently, he proposed to allow the sequences permitted by his art to proliferate indiscriminately to include subjects, predicates, rules and relations.

Subjects were multiplied by distributing them, each according to its own species, properties and accidents, by allowing them free play with terms that are similar or opposite, and by referring each to its respective causes, actions, passions and relations.

All that is necessary is to place whatever idea one intends to consider in the center of the circle, as Lull did with the letter A, and calculate its possible concatenations with all other ideas.

Add to this that, for Agrippa, it was permissible to add many other figures containing terms extraneous to Lull’s original scheme, mixing them up with Lull’s original terms: the possibilities for combination become almost limitless (Carreras y Artau 1939: 220-1).

Valerio de Valeriis seems to want the same in his Aureum opus (1589), when he says that the Ars “teaches further and further how to multiply concepts, arguments, or any other complex unto infinity, tam pro parte vera quam falsa, mixing up roots with roots, roots with forms, trees with trees, the rules with all these other things, and very many other things as well” (“De totius operis divisione“).

Authors such as these still seem to oscillate, unable to decide whether the Ars constitutes a logic of discovery or a rhetoric which, albeit of ample range, still serves merely to organize a knowledge that it has not itself generated.

This is evident in the Clavis universalis artis lullianae by Alsted (1609). Alsted is an author, important in the story of the dream of a universal encyclopedia, who even inspired the work of Comenius, but who still–though he lingered to point out the kabbalist elements in Lull’s work–wished to bend the art of combination into a tightly articulated system of knowledge, a tangle of suggestions that are, at once, Aristotelian, Ramist and Lullian (cf. Carreras y Artau 1939: II, 239-49; Tega 1984: I, 1).

Before the wheels of Lull could begin to turn and grind out perfect languages, it was first necessary to feel the thrill of an infinity of worlds, and (as we shall see) of all of the languages, even those that had yet to be invented.”

Eco: Cosmic Permutability and the Kabbala of Names 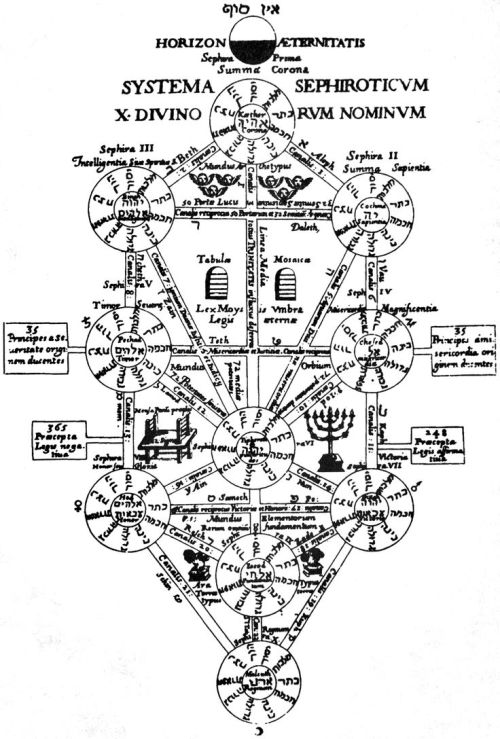 Athanasius Kircher, The Ten Sefirot, from Oedipus Aegyptiacus, published in three folio tomes in Rome, 1652-54. This was considered Kircher’s masterwork on Egyptology, and it cast a long shadow for centuries until Champollion deciphered the Rosetta Stone in 1824, unlocking the secrets of the Egyptian hieroglyphs: Kircher was exposed as an erudite fraud. Kircher cited Chaldean astrology, Hebrew kabbalah, Greek myth, Pythagorean mathematics, Arabic alchemy and Latin philology as his sources.

“The kabbalist could rely on the unlimited resources of temurah because anagrams were more than just a tool of interpretation: they were the very method whereby God created the world.

This doctrine had already been made explicit in the Sefer Yezirah, or Book of Creation, a little tract written some time between the second and the sixth centuries. According to it, the “stones” out of which God created the world were the thirty-two ways of wisdom. These were formed by the twenty-two letters of the Hebrew alphabet and the ten Sefirot.

“Twenty-two foundation letters: He ordained them, He hewed them, He combined them, He weighed them, He interchanged them. And He created with them the whole creation and everything to be created in the future.” (II, 2).

“Twenty-two foundation letters: He fixed them on a wheel like a wall with 231 gates and He turns the wheel forward and backward.” (II, 4).

Indeed, not only the mouth and ear, but even a modern computer, might find it difficult to keep up with what happens as the number of stones (or letters) increases. What the Book of Creation is describing is the factorial calculus. We shall see more of this later, in the chapter on Lull’s art of permutation.

The kabbala shows how a mind-boggling number of combinations can be produced from a finite alphabet. The kabbalist who raised this art to its highest pitch was Abulafia, with his kabbala of the names (cf. Idel 1988a, 1988b, 1988c, 1989).

The kabbala of the names, or the ecstatic kabbala, was based on the practice of the recitation of the divine names hidden in the Torah, by combining the letters of the Hebrew alphabet.

The theosophical kabbala, though indulging in numerology, acrostics and anagrams, had retained a basic respect for the sacred text itself. Not so the ecstatic kabbalah: in a process of free linguistic creativity, it altered, disarticulated, decomposed and recomposed the textual surface to reach the single letters that served as its linguistic raw material.

For the theosophical kabbala, between God and the interpreter, there still remained a text; for the ecstatic kabbalist, the interpreter stood between the text and God.”

Seeking the Garden of Eden Alphabet

“The letterforms of the Sinatic and Ezra Hebrew alphabets bear little physical resemblance to one another, though they share the same twenty-two-letter format and have the same names for the letters.

Sinatic and Brahmi have many similar letterforms, and both were replaced by later alphabets claimed in present times to be the originals (i.e. Sinatic replaced by Ezra and Brahmi replaced by Deva Negari).

Some Qabalists and Tantrikas maintain that there is a parent alphabet, called the “Gan Aden Alphabet” (Garden of Eden), from which both Hebrew and Sanskrit are derived.

There is also said to be a Gan Aden Torah, an unbroken sequence of letters that may be broken into words and sentences in innumerable ways.

Hence, the written Torah is one such “translation” of the unbroken letter sequence, minus the letters and anusvara that were not included in the Hebrew alphabet.

A book called the Tiqunim HaZohar (“Perfections of Splendor”) discusses seventy ways of translating the first six letters of the Torah.”

–Daniel Feldman, Qabala: The Mystical Heritage of the Children of Abraham, 2001, pg. 57.

“Gematria is one of the rules for interpreting the Torah, and is partially a high-level system of numerology.

It is defined by Scholem as, “explaining a word or group of words according to the numerical value of the letters, or of substituting other letters of the alphabet for them in accordance with a set system. All Hebrew letters are equally values and words, so for example the letter Aleph, signifying “A,” also means “one,” as well as being a word meaning ‘ox.'” The table given lists the major values and meanings of the twenty-two letters. This allows the letters to be taken as symbols expressing differing aspects of the Universe, either as separate entities, or when combined together in words.”

“Although some Kabbalists denied the use of Gematria as relevant, other workers such as Abulafia dealt with Gematria so deeply that their works need “decoding” rather than reading. It is said that the Torah is likewise written, and that “mistakes” in the original Greek and Hebrew texts are not mistakes, but rather spellings and variations necessary to ensure the numbers underlying them were correct.”

“Later he became fascinated with more abstract topics: numbers in Greek medicine, the numbers seven, nine and forty, and the concept of an imaginary middle point, the omphalos or world-navel, a recurrent theme in Greek, Roman and Semitic mythology.”

–W.H. Roscher, Pan and the Nightmare: Ephialtes–A Pathological-Mythological Treatise on the Nightmare in Classical Antiquity, & An Essay on Pan by James Hillman, 1972. Pp., pg. v.

Prayers as Reflections of Intrinsic Harmonies.

“Rabbi Judah the Pious developed a unique conception of the Hebrew prayers, intensely mystical in character, which viewed the text of the traditional prayers as a reflection of a hidden, intrinsic numerical harmony that binds together the words and letters of the sacred texts and all phenomena of existence.”

Dr. John Dee, the Monas, and the Hebrew Alphabet as the Device of Divine Creation.

“…Dee was fascinated with the application of the exegetical techniques of cabbala to alchemy. He was well aware that each letter of the Hebrew alphabet has a numerical equivalence, and that the computation of these numbers in words and comparison with other significant words was believed to provide insights into various levels of reality. The fourth-century Sefer Ytzirah, or Jewish Book of Formation, gives a cosmogonic account of God engraving the universe with the twenty-two foundational letters of the Hebrew alphabet.”