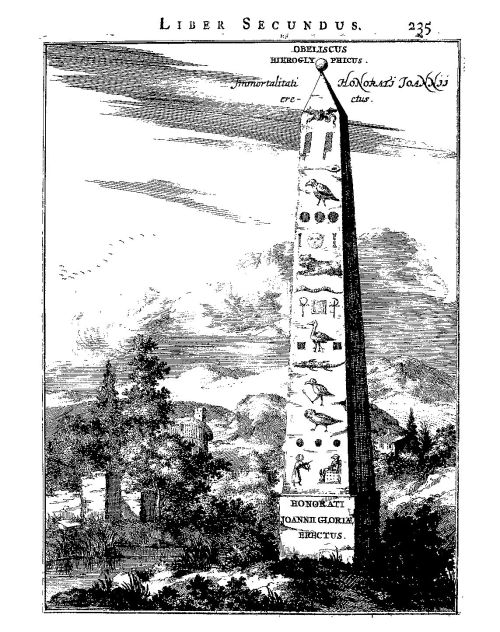 Athanasius Kircher (1602-80), hieroglyphic obelisk in honor of Honoratus Ioannis, from Principis Christiani Archetypon Politicum, Amsterdam, 1672, p. 235. Courtesy of Bayerische Staats Bibliothek and Stanford University. This work is in the public domain in its country of origin and other countries and areas where the copyright term is the author’s life plus 100 years or less.

“In his Essai sur l’origine des connaissances humaines (1746), Condillac took Locke’s empiricism and reduced it to a radical sensationalism. According to Condillac, it was not only perception that derived from the senses, but all the working of our minds–memory, awareness, comparison and, consequently, judgement.

In this genesis of ideas, signs play a fundamental role: they express at first our primary feelings, by cries and gestures–a language of action. Afterwards this purely emotional language evolves to function as the mode in which we fix our thoughts–a language of institution.

The notion of a language of action had already been expressed by William Warburton (The Divine Legation of Moses, 1737-41). It was an idea that was to become an important tenet of sensationalist philosophy, as it provided a link that helped explain how human beings had passed from simple, immediate responses to more complex forms of cultural behavior, in the course of an irreversible historical development.

At the very end of the century, the Idéologues began to fill this picture in, elaborating a vision of the early course of human history that was, at once, materialist, historicist and sensitive to social factors.

They began to investigate every form of expression: various types of pictographic sign, gestures in the pantomime or in the language of deaf-mutes, orators and actors, algebraic characters, the jargons and passwords of secret societies (for it was in this period that masonic confraternities were founded and spread).

In works such as the Eléments d’idéologie by Antoine-Louis-Claude Destutt De Tracy (1801-15, 4 vols) and, even more, Des signes by Joseph-Marie de Degérando (1800: I, 5) a great historic panorama began to emerge.

At the first stage, human beings sought to make their intentions known to each other through simple actions; at the next stage they passed gradually to a language of nature, that is, an imitative language in which they could represent, by a sort of pantomime, a real action.

This would be a language still subject to misunderstandings, for there would be nothing to guarantee that both parties in a conversation would associate the mimed sign with the same idea, and that, consequently, the receiver would draw the intended conclusions about the purposes and circumstances for which the pantomime had been enacted.

Where the purpose was to refer to an object that was actually present, all that was necessary was a sign we might call indexical–a cry or glance in the direction of the object, a pointing of a finger.

Indexical signs would no longer do, however, where the intention was to refer to an object not present, either because the object was physically located at some other place or time, or because the “object” was, in fact, an interior state.

Where the absent object was physical and material, a mimed imitation might still be able to denote it–trying to imitate not substances but actions. To refer to non-physical, interior states, however, it was necessary to develop a more figurative language, a language of metaphor, synecdoche and metonymy.

Two weights hefted by the hands might, for example, suggest making a judgement between two parties; a flame might symbolize an ardent passion, and so on. Up to this point, we are still in a language of analogies, expressed in gestures, cries and primitive onomatopoeia, or by a symbolic or pictographic form of writing.

Slowly, however, these signs of analogy become signs of habitude; they are codified, more or less arbitrarily, up to the birth of a language in the strict sense of the term. Thus the semiotic machinery constructed by humanity is determined by environmental and historical factors.

This elaboration by the Idéologues implied a cogent and devastating critique of any idea of a perfect original language. It is a critique, moreover, that brought an argument initiated over two centuries earlier to a close.

This was the argument that had begun with the rediscovery of the hypothesis of Epicurus, and with the first reflections of Montaigne and Locke on the variety of cultures and the differences in beliefs among the variety of exotic peoples that the accounts of the explorers of their times were revealing.

Thus, under the entry “Language” in the Encyclopédie, Jaucourt could say that since languages were all reflections of the “genius” of the various peoples, it is impossible to conceive of a universal tongue.

Since customs and ideas were determined by climate, upbringing and government, it was not possible to impose the same customs, or the same ideas of vice and virtue, on all nations.

In this formulation, the notion of “genius” was employed as a means of explaining how each language contains its own particular vision of the world. Yet such a notion also implies that languages were mutually incommensurable.

This was an idea that already appears in Condillac (Essai sur l’origine des connaissances humaines, II, I, 5). It also appeared in Herder (Fragmente über die neuere deutsche Literatur, 1766-7), and was developed by Humboldt (Fragmente über die Verschiedenheit des menschlichen Sprachbaues und ihren Einfluss auf die geistige Entwicklung des Menschengeschlechts, 1836), for whom every language possesses its own innere Sprachform, an inner form expressing the vision of the world of the people who speak it.

When one assumes that there is an organic relation and a reciprocal influence between language and thought, it is clear that such an interaction does not only work within a given language at a given historical time: it affects the very historical development of every language and of every culture. (cf. De Mauro 1965: 47-63).”