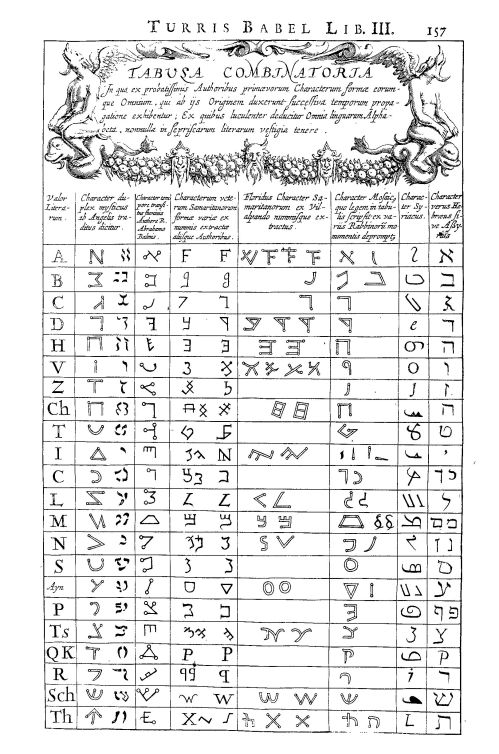 “Another alternative was to accept that Hebrew had been the original perfect language, but to argue that, after the confusio, the crown of perfection had been bestowed upon other languages.

The first text which countenances this sort of “nationalistic” reconstruction of linguistic history is the Commentatio super opera diversorum auctorum de antiquitatibus loquentium of 1498 by Giovanni Nanni, or Annius, which tells how, before it was colonized by the Greeks, Etruria had been settled by Noah and his descendants.

Nanni is here reflecting on the contradiction between Genesis 11, the story of Babel, and Genesis 10. In 10:5, the sons of Japheth settle the “isles of the Gentiles  . . . every one after his tongue.”

The notion of a lineage ascending from modern Tuscan through Etruscan to the Aramaic of Noah was elaborated in Florence by Giovann Battista Gelli (Dell’origine di Firenze, 1542-4), and by Piero Francesco Giambullari (Il Gello, 1564).

Their thesis, fundamentally anti-humanist, accepted the idea that the multiplication of tongues had preceded Babel (citing what Dante had had to say in Paradise, xxvi).

This thesis was passionately received by Guillaume Postel, who, we have seen, had already argued that Celtic had descended from Noah. In De Etruriae regionis (1551) Postel embraced the position of Gelli and Giambullari concerning the relationship of the Etruscan to Noah, qualifying it, however, by the claim that the Hebrew of Adam had remained–at least in its hieratic form–uncontaminated throughout the centuries.

More moderate were the claims of Spanish Renaissance authors. The Castilian tongue too might claim descent from one of Japheth’s many sons–in this case Tubal. Yet it was still only one of the seventy-two languages formed after Babel.

This moderation was more apparent than real, however, for, in Spain, the term “language of Babel” became an emblem of antiquity and nobility (for Italian and Spanish debates, cf. Tavoni 1990).

It was one thing to argue that one’s own national language could claim nobility on account of its derivation from an original language–whether that of Adam or that of Noah–but quite a different matter to argue that, for this reason, one’s language ought to be considered as the one and only perfect language, on a par with the language of Adam.

Only the Irish grammarians cited in the first chapter and Dante had had, so far, the audacity to arrive at such a daring conclusion (and even Dante–who had aspired to create a perfect language from his own vernacular–made sarcastic remarks on those who consider their native language as the most ancient and perfect: cf. DVE, I, vi).

By the seventeenth century, however, linguistic nationalism had begun to bud; this prompted a plethora of such curious claims.

Goropius Becanus (Jan van Gorp) in his Origins Antwerpianae of 1569 agreed with all claims made about the divine inspiration of the original language, and about its motivated and non-arbitrary relation between words and things.

According to him there was only a single living language in which this motivated concordance existed to an exemplary degree; that language was Dutch, particularly the dialect of Antwerp.

The ancestors of the burghers of Antwerp were the Cimbri, the direct descendants of the sons of Japheth. These had not been present under the Tower of Babel, and, consequently, they had been spared the confusio linguarum.

Thus they had preserved the language of Adam in all its perfection. Such an assertion, Becanus claimed, could be proved by etymological demonstrations. He produced a string of arguments whose level of etymological wishful thinking matched those of Isidore and Guichard; they later became known as “becanisms” or “goropisms.”

Becanus further claimed that his thesis was also proved by the facts that the Dutch had the highest number of monosyllabic words, possessed a richness of sounds superior to all other languages, and favored in the highest degree the formation of compound words.

Becanus‘ thesis was later supported by Abraham Mylius (Lingua belgica, 1612) as well as by Adrian Schrickius (Adversariorum Libri III, 1620), who wished to demonstrate “that Hebrew was divine and firstborn” and “that Teutonic came immediately afterwards.”

Teutonic here meant the Dutch spoken in Antwerp, which, at the time, was its best-known dialect. In both cases, the demonstration was supported by etymological proofs little better than those of Becanus.”