“The transference of the centre of power from Assur to Nineveh made the anthropomorphic side of Assur’s nature still more prominent. He represented now the whole nation and the central power which governed the nation. He was thus the representative at once of the people and of the king in whose hands the government of the people was centred.

Assyria became “the land of the god Assur,” belonging to him in much the same way as the city of Babylon belonged to Bel-Merodach. But whereas Bel-Merodach was the Baal of a particular city only, Assur was, like the Yahveh of Israel, the national god of a race.

There was yet another respect in which Assur resembled the Yahveh of Israel. There was no goddess Assurritu by the side of Assur, as there was an Anatu by the side of Anu, a Beltis by the side of Bel. If, in imitation of Babylonian usage, Bilat or Beltis is sometimes addressed as the consort of Assur, it is simply a literary affectation; Assur was not a Bel or Baal, like Merodach.

Bilat is a Babylonian goddess; she is properly the wife of the older Bel, in later times identified with Zarpanit. There is no indication that Assur had a “face” or reflection; he stands by himself, and the inspiration received from him by the Assyrian kings is received from him alone. When a female divinity is invoked along with him, it is the equally independent goddess Istar or Ashtoreth.

We possess a list of the deities whose images stood in the temples of Assur at Assur and Nineveh.

At the head of each list the name of Assur is thrice invoked, and once his name is followed by that of Istar. There was, in fact, a special form of Istar, under which she was worshipped as “the Istar of Nineveh;” but the form was purely local, not national, arising from the existence there of a great temple dedicated to her. There was no national goddess to place by the side of the national god.

Assur consequently differs from the Babylonian gods, not only in the less narrowly local character that belongs to him, but also in his solitary nature. He is “king of all gods” in a sense in which none of the deities of Babylonia were.

He is like the king of Assyria himself, brooking no rival, allowing neither wife nor son to share in the honours which he claims for himself alone. He is essentially a jealous god, and as such sends forth his Assyrian adorers to destroy his unbelieving foes. Wife-less, childless, he is mightier than the Babylonian Baalim; less kindly, perhaps, less near to his worshippers than they were, but more awe-inspiring and more powerful.

We can, in fact, trace in him all the lineaments upon which, under other conditions, there might have been built up as pure a faith as that of the God of Israel.”

A.H. Sayce, Lectures on the Origin and Growth of Religion as Illustrated by the Religion of the Ancient Babylonians, 5th ed., London, 1898, pp. 126-9.

“Supreme over the old Babylonian pantheon rises the figure of a new god, the national deity of Assyria, its impersonation Assur. Assur is not merely primus inter pares, merely the president of the divine assembly, like Merodach; he is their lord and master in another and more autocratic sense.

Like the Yahveh of Israel, he claims to be “king above all gods,” that “among all gods” there is none like unto himself. In his name and through his help the Assyrian kings go forth to conquer; the towns they bum, the men they slay, the captives they take, are all his gifts.

It is to destroy “the enemies of Assur,” and to lay their yoke upon those who disbelieve in his name, that they load their armies into other lands; it is his decrees, his law, that they write upon the monuments they erect in conquered countries.

The gods of Babylonia are invoked, it is true; their old Babylonian titles are accorded to them; they are called upon to curse the sacrilegious in the stereotyped phrases of the ancient literature; but it is Assur, and Assur alone, to whom the Assyrian monarch turns in moments of distress; it is Assur, and Assur alone, in whose name he subdues the infidel. Only the goddess Istar finds a place by the side of Assur.

It is not difficult to account for all this. In passing from their native homes to Assyria, the Babylonian deities lost that local character which was the very breath of their existence. How far they owe their presence in Assyrian literature to the literary class, how far they had been brought from Babylonia in early days by the people themselves, I am not prepared to say.

One fact, however, is clear; in becoming Assyrian the Babylonian gods have lost both their definiteness and their rank. The invocations addressed to them lack their old genuine ring, their titles are borrowed from the literature of the southern kingdom, and their functions are usurped by the new god Assur.

It is almost pitiable to find Bel-Merodach invoked, in phrases that once denoted his power above other deities, by the very kings who boast of their conquests over his people, or who even razed his city to the ground.

The Assyrian, in fact, occupied much the same position as an Israelite who, while recognizing the supremacy of his national God, thought it prudent or cultivated to offer at the same time a sort of inferior homage to the Baalim of Canaan.”

A.H. Sayce, Lectures on the Origin and Growth of Religion as Illustrated by the Religion of the Ancient Babylonians, 5th ed., London, 1898, pp. 122-3.

“Up to the last, Babylonian religion remained local. It was this local character that gives us the key to its origin and history, and explains much that would otherwise seem inconsistent and obscure.

The endeavour of Nabonidos to undermine its local character and to create a universal religion for a centralised Babylonia, was deeply resented by both priests and people, and ushered in the fall of the Babylonian empire. The fundamental religious idea which had underlain the empire had been the supremacy of Merodach, the god of Babylon, over all other gods, not the absorption of the deities of the subject nations into a common cult.

The policy of Nabonidos, therefore, which aimed at making Merodach, not primus inter pares, but absolute lord of captive or vassal deities, shocked the prejudices of the Babylonian people, and eventually proved fatal to its author.

In Cyrus, accordingly, the politic restorer of the captive populations and their gods to their old homes, the priests and worshippers of the local divinities saw the pious adherent of the ancient forms of faith, and the real favourite of Merodach himself.

Merodach had not consented to the revolutionary policy of Nabonidos; he had, on the contrary, sympathised with the wrongs of his brother gods in Babylonia and throughout the world, and had thus deserted his own city and the renegade monarch who ruled over it.

In all this there is a sharp contrast to the main religious conception which subsequently held sway over the Persian empire, as well as to that which was proclaimed by the prophets of Judah, and in the reforms of Hezekiah and Josiah was carried out practically by the Jewish kings. The Ahura-mazda whom Dareios invokes on the rock of Behistun is not only the lord of the gods, he is a lord who will not brook another god by his side. 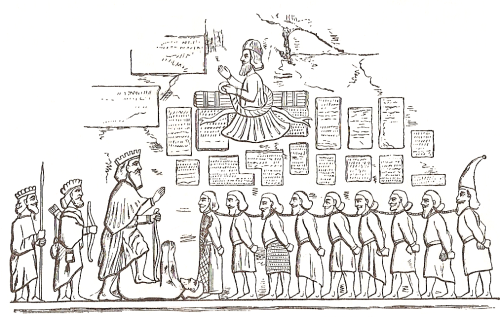 A penciled illustration of the Behistun Inscription.
https://commons.wikimedia.org/wiki/File:Behistun_Inscription_Eger.png

In Judah, a theocracy was established on the ruins of the old beliefs which had connected certain localities with certain forms of divinity, and which found such naive expression in the words of David to Saul (1 Samuel xxvi. 19): “They have driven me out this day from abiding in the inheritance of the Lord, saying, Go, serve other gods.”

The destruction of the high-places and the concentration of the worship of Yahveh in Jerusalem, was followed by the ever-increasing conviction that Yahveh was not only a jealous God who would allow none other gods besides Himself; He was also a God who claimed dominion over the whole world.”

A.H. Sayce, Lectures on the Origin and Growth of Religion as Illustrated by the Religion of the Ancient Babylonians, 5th ed., London, 1898, pp. 89-90.

The True Pronunciation of the Ineffable Name, From an Assyrian Inscription

” … And not only names of Biblical places, but of Biblical persons are to be found there; as Hezekiah and Jehoahaz, Ahab and Jehu, and Hazael, Sennacherib, Esarhaddon, and Nebuchadnezzar.

Under this head of scriptural illustration will come the deeply interesting fact, that we now obtain evidence of the true pronunciation of the sacred and incommunicable name of God. It is, we believe, generally admitted among Hebrew scholars, that the name Jehovah, as the designation of the supreme God, is incorrect.

The Jews never pronounce this name.8

You never meet with it in the New Testament; showing that even at that time either the true pronunciation was lost, or it was considered unlawful to pronounce it, which is the statement of Philo Judaeus, confirmed by Josephus.

In the Cyprus Inscription of Sargon we read of a certain Ya-hu-bidi, king of Hamath. Now as this king’s name is preceded by the sign indicating a god, it is evident that his name is a compound of some divine name, such as Yahu’s servant, in which it resembles the Hebrew name Jehoahaz, more correctly Yeho-ahaz “one who holds to Yeho,” or Jehovah. In the book of Psalms, too, we are told to praise God by his name Yah, which is an abbreviated form of Yahu.

Lastly. That this was the most sacred name of God as taught in the mysteries we learn from Macrobius and Plutarch. We may assume, therefore, from the very accurate mode of Assyrian vocalization, that we have here the correct pronunciation of a Semitic name as found in an Assyrian inscription, and that Ya-hu, or Ya-ho, and not Jehovah, is the correct pronunciation of what has been called “the ineffable name” of the Most High.”