Selz: No Connection Between the Biblical Patriarchs and the Babylonian Antediluvian Kings

“After an increasing wealth of Mesopotamian cuneiform tablets was excavated and translated in the middle of the nineteenth century, critical evaluation of the biblical traditions gained great momentum.

In 1872 George Smith delivered a paper to the Society of Biblical Archaeology in London, announcing the discovery of a Babylonian version of the biblical flood story, hereby renewing the interest in the extra-biblical traditions of Antiquity and eventually supporting the account of Berossos’ Babyloniaca.

A few years later, in 1876, Smith published his book The Chaldean Account of Genesis, in which he included translations of excerpts from fragments of Atrahasīs, a text which, together with the so-called “Creation Epic Enūma Elīsh,” soon became a corner stone for all comparisons between the biblical and Mesopotamian accounts of the “history” of primeval times. 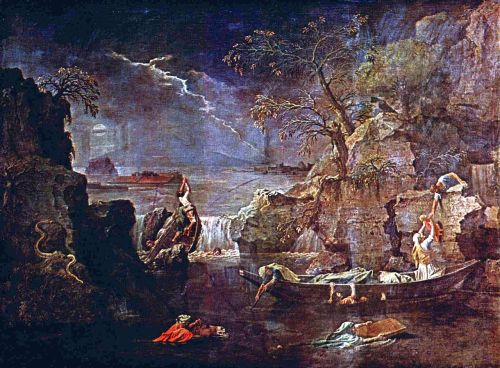 Winter or Flood, by Nicolas Poussin (1594-1665 CE), painted between 1660 and 1664 CE. This oil on canvas work is in the permanent collection of the Louvre Museum, hanging in room 16, Richelieu, 2d floor.
Accession number INV 7306.
Courtesy of The Yorck Project: 10.000 Meisterwerke der Malerei. DVD-ROM, 2002. ISBN 3936122202. Distributed by DIRECTMEDIA Publishing GmbH.
The work of art depicted in this image and the reproduction thereof are in the public domain worldwide. The reproduction is part of a collection of reproductions compiled by The Yorck Project. The compilation copyright is held by Zenodot Verlagsgesellschaft mbH and licensed under the GNU Free Documentation License.
https://en.wikipedia.org/wiki/The_Four_Seasons_(Poussin)#The_Deluge

(The comparison of the Mesopotamian flood story with its Noah-related figure of Ziusudra/Utnapishtim and the Babylonian Epic of Creation in conjunction with Berossos’ account of Babylonian History fostered many hypotheses and any originality of the biblical stories became disputed. 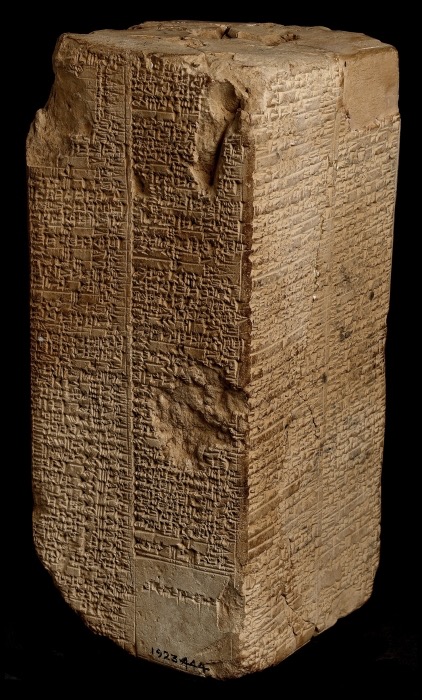 Among the extant exemplars of the Sumerian King List, the Weld-Blundell prism in the Ashmolean Museum cuneiform collection represents the most extensive version as well as the most complete copy of the King List.
Listing rulers from the antediluvian dynasties to Suen-magir, the fourteenth ruler of the Isin dynasty (ca. 1763–1753 B.C.), the prism has four sides with two columns on each side.
The prism is perforated, and it originally stood on a wooden spindle going through its centre so that it could be rotated and read on all four sides.
http://cdli.ox.ac.uk/wiki/doku.php?id=the_sumerian_king_list_sklid=the_sumerian_king_list_skl

To cut a long story short, when S. Langdon published the Weld-Blundell (WB) copy of the Sumerian King List in 1923, a thorough revision of earlier opinions became necessary.

It became clear, in particular, that the names of (most) of Berossos’ early Babylonian rulers were of Sumerian origin. Zimmern himself revised his earlier theories and Pater Anton Deimel even disputed any connection of the cuneiform tradition to the biblical patriarchs.”

(“It is likely better to honestly admit that so far no connection whatsoever between the Babylonian and the biblical tradition is established with respect to the antediluvian patriarchs.”)

Gebhard J. Selz, “Of Heroes and Sages–Considerations of the Early Mesopotamian Background of Some Enochic Traditions,” in Armin Lange, et al, The Dead Sea Scrolls in Context, v. 2, Brill, 2011, pp. 789-90.

On Divination in Ancient Babylonia

“Divination as practised by means of augury was a rite of the first importance among the Babylonians and Assyrians. This was absolutely distinct from divination by astrology.

The favourite method of augury among the Chaldeans of old was that by examination of the liver of a slaughtered animal. It was thought that when an animal was offered up in sacrifice to a god that the deity identified himself for the time being with that animal, and that the beast thus afforded a means of indicating the wishes of the god. 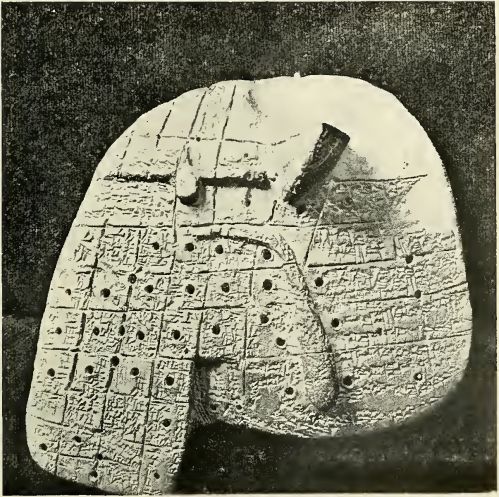 Simulacrum of a sheep’s liver, inscribed with magical formulae for purposes of divination by the priests of Babylon.
Photo W. A. Mansell and Co.
Lewis Spence, Myths and Legends of Babylonia and Assyria, London, 1917. P. 281.
http://www.wisdomlib.org/uploads/images/clay-object.jpg

Now among people in a primitive state of culture the soul is almost invariably supposed to reside in the liver instead of in the heart or brain. More blood is secreted by the liver than by any other organ in the body, and upon the opening of a carcase it appears the most striking, the most central, and the most sanguinary of the vital parts. The liver was, in fact, supposed by early peoples to be the fountain of the blood supply and therefore of life itself.

Hepatoscopy or divination from the liver was undertaken by the Chaldeans for the purpose of determining what the gods had in mind. The soul of the animal became for the nonce the soul of the god, therefore if the signs of the liver of the sacrificed animal could be read the mind of the god became clear, and his intentions regarding the future were known.

The animal usually sacrificed was a sheep, the liver of which animal is most complicated in appearance. The two lower lobes are sharply divided from one another and are separated from the upper by a narrow depression, and the whole surface is covered with markings and fissures, lines and curves which give it much the appearance of a map on which roads and valleys are outlined. This applies to the freshly excised liver only, and these markings are never the same in any two livers.

Certain priests were set apart for the practice of liver-reading, and these were exceedingly expert, being able to decipher the hepatoscopic signs with great skill. They first examined the gall-bladder, which might be reduced or swollen. They inferred various circumstances from the several ducts and the shapes and sizes of the lobes and their appendices. Diseases of the liver, too, particularly common among sheep in all countries, were even more frequent among these animals in the marshy portions of the Euphrates Valley.

The literature connected with this species of augury is very extensive, and Assur-bani-pal’s library contained thousands of fragments describing the omens deduced from the practice. These enumerate the chief appearances of the liver, as the shade of the colour of the gall, the length of the ducts, and so forth.

The lobes were divided into sections, lower, medial, and higher, and the interpretation varied from the phenomena therein observed. The markings on the liver possessed various names, such as ‘palaces,’ ‘weapons,’ ‘paths,’ and ‘feet,’ which terms remind us somewhat of the bizarre nomenclature of astrology.

Later in the progress of the art the various combinations of signs came to be known so well, and there were so many cuneiform texts in existence which afforded instruction in them, that a liver could be quickly ‘read’ by the barû or reader, a name which was afterward applied to the astrologists as well and to those who divined through various other natural phenomena.

One of the earliest instances on record of hepatoscopy is that regarding Naram-Sin, who consulted a sheep’s liver before declaring war. The great Sargon did likewise, and we find Gudea applying to his ‘liver inspectors’ when attempting to discover a favourable time for laying the foundations of the temple of Nin-girsu.

Throughout the whole history of the Babylonian monarchy in fact, from its early beginnings to its end, we find this system in vogue. Whether it was in force in Sumerian times we have no means of knowing, but there is every likelihood that such was the case.”