“Sanders suggests this discrepancy indicates the four human apkallū are “extraneous” while Wiggerman gives it a source critical interpretation, suggesting “the list of apkallū does not originate from bīt mēseri but from another text—a chronicle ?—, from where it was adapted by bīt mēseri.”

(Sanders, “Writing, Ritual, and Apocalypse,” 117; Wiggermann, Mesopotamian Protective Spirits, 108. They do appear extraneous in the incantation when viewed from the perspective of the ritual instructions, and the four human apkallū almost certainly were taken from some other traditional context, though we have not yet identified it.) 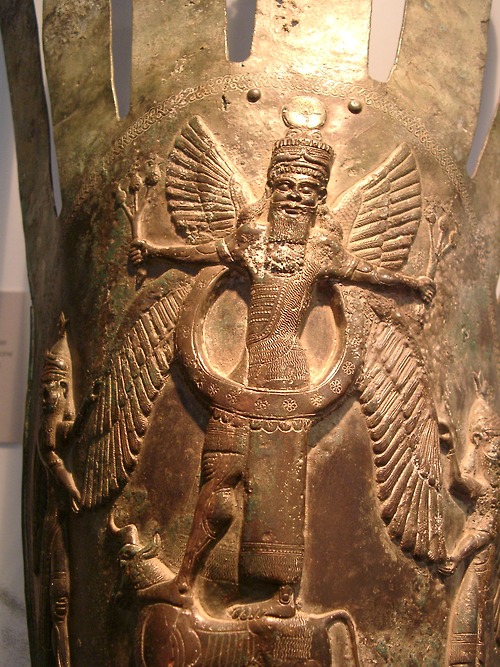 This design is perplexing. I am uncertain whether it depicts a human apkallū, an ummânū, or, as earlier analysts assessed, the god Anu.
The iconography is correct for an apkallū. The horned headdress is indicative of divinity, the plants held in both hands are not unprecedented, though they are not common. They appear to be poppies.
The rosette design in the large ring around his waist appears elsewhere in Neo-Assyrian symbolism, though its significance is undetermined. In no other case have I seen a ring surrounding the waist of such a figure.
The wings on the apkallū are typical.
The fact that this figure stands on a bull, however, suggests that this is a depiction of a deity, rather than a human apkallū.
Further, the disc atop the headdress is problematic. In no other example does a human apkallū appear with a disc surmounting a horned headdress.
Indeed, it is unclear whether the disc is just worn with time, or whether the lower part of the disc portrays the inverted horns of the Moon, indicative of the Moon god Sin.
This is one of the most dramatic examples of Neo-Assyrian art, but my scholarship is too meager to explicate it.
http://transfixussednonmortuus.tumblr.com/image/32382020729

Building on these interpretations, I suggest that the absence of the four human apkallū from the ritual instructions is a textual clue that they are in fact a later addition to the incantation.

According to this interpretation, the text provides evidence that someone deliberately associated the two groups of apkallū, human and mythic, sometime in the early first millennium.

This depiction of a human apkallū, or ummânū, portrays the right hand raised in the greeting gesture, and the banduddū bucket in the left hand.
This ummânū displays the rosette design on bilateral wristbands and on a headband, which differs from the usual horned headdress.
The wings are typical, further indicative of divinity or partial divinity.

That is to say, the disconnect between ritual and incantation provides a hint at alteration or innovation—i.e., an active interest—in the apkallū tradition attested here.

(For a much more detailed example of finding literary and socio-religious data in the discrepancies between an incantation and its associated ritual, see Tzvi Abusch, “Ritual and Incantation: Interpretation and Textual History of Maqlû VII:58-105 and IX:52-59,” in “Shaharei Talmon:” Studies in the Bible, Qumran, and the Ancient Near East Presented to Shemaryahu Talmon, ed. Michael Fishbane and Emanuel Tov with the assistance of Weston W. Fields (Winona Lake: Eisenbrauns, 1992), 367-80; reprinted in Tzvi Abusch, Mesopotamian Witchcraft: Toward a History and Understanding of Babylonian Witchcraft Beliefs and Literature, Ancient Magic and Divination 5 (Leiden: Brill / Styx, 2002). 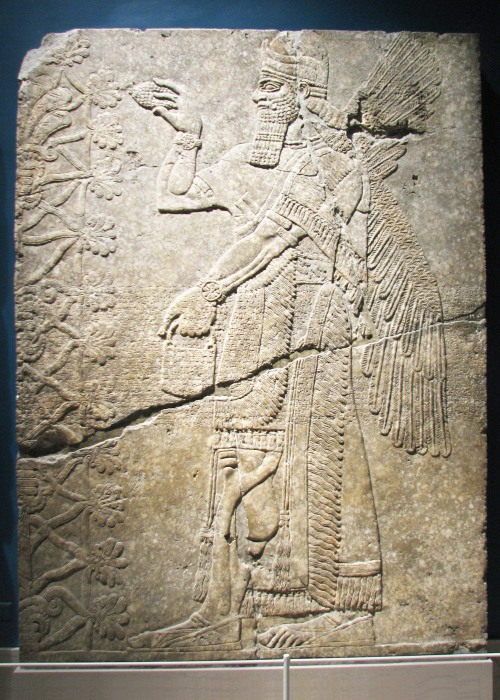 This depiction of a human apkallū, or ummânū raises the mullilu cone in the right hand, in the prototypical gesture of blessing and exorcism, releasing all sin.
The gesture is one of sprinkling water, with the water contained in the banduddû bucket in the left hand.
This ummânū wears wristbands with the undefined rosette design, but in this example the headdress is the horned tiara indicative of divinity.
Wings reflecting divinity or semi-divinity are also present.
In this bas relief, the ummânū is blessing or purifying a sacred tree.
It is possible that the blossoms on the sacred tree are related to the rosette design on the wristbands, though I am unaware at this time of any scholarship drawing the similarity.

(Besides the generic difference the text also has a difference with regard to the included content: kings are only mentioned with two of the human apkallū and none is mentioned with the mythic apkallū. Since Bīt mēseri is a ritual, we would not expect the sage-king association to appear.

This ummânū uniquely presents with a feather in the raised right hand, and a kid goat held in the left.
I am unaware of any other depiction like this one.
The bracelets of rosette design appear bilaterally on both wrists, as do bracelets around the upper arms.
The tassels are finely detailed, and a tassel can be discerned on the ummânū’s upper back.
This depiction is also perhaps unique in the degree of fine detail lavished on the wings, and on the fringe of the garment.
This ummânū also wears a headband with the rosette design, rather than the horned tiara.

Due to their association with Ea, the apkallū were “natural” candidates for invocation in apotropaic/exorcistic contexts (see, e.g., Benjamin Foster, “Wisdom and the Gods in Ancient Mesopotamia,” Orientalia 43 [1974], 344-54, here 349 and other examples below).

This portrayal of a human apkallū, or ummânū, wears the horned headdress indicative of divinity, and raises his right hand in the greeting gesture.
Uniquely, this depiction carries an er’u stick, emblazoned with an un-circled rosette design that reflects the bracelet on the ummânū wrist.
It also strikes me as possible that the stick is a mace.
It should be noted that these rosette designs feature nine petals.
This ummânū is unique, perhaps, in that bracelets on the upper arms are depicted.
Likewise noteworthy are the tassels hanging from the apparel, which appear in other depictions but not, perhaps, with this degree of fine detail.
Note the attention to detail revealed in the thumbnail of each hand.
The wings, indicative of divinity, also portray uncommon detail.

But kings are not figures typically invoked in incantations. Thus, it is not really surprising that we do not see the connection made systematically in such a context. However, when a sage–king connection is mentioned, it is interesting to see signs of continuity with the later ULKS. For example, Nungalpirigal is associated with Enmerkar in both Bīt mēseri and the ULKS.)

If this were the only instance of apkallū in a ritual context, this difference in genre would be of little consequence. But, in fact, it is not. The seven apkallū are mentioned, for example, in anti-witchcraft incantations in Maqlû II 124, V 110, VII 49, VIII 38 (though without names).

This ummânū kneels before the sacred tree, apparently depicted in the act of tending to it.
This bas relief is perhaps unique in its fine detail which survived a long period of time.
Note the care focused on the fingernails and toenails.
The rosette design is mirrored on the bracelets, while this ummânū wears the horned tiara of divinity.
The tassels from the apparel are finely detailed, and another tassel appears behind ummânu’s neck, beneath his braided hair.
The earrings are of an unknown design.

(7 apkallē sūt Eridu likpidūšunūti ana lemuttim: “May the seven sages of Eridu plan evil for them.” This counters the assertion that the sorcerers have planned evil for the patient in II 117.

An ummânū, or sage of human descent. The ummânū raises his right hand in the iconic gesture of greeting, with uncertain plants in his left hand.
The rosette design on his wristband is perhaps uniquely not reflected on the opposite wrist. Bracelets appear on the upper arms.
The horned tiara headdress, indicative of divinity, is often worn by such figures.