The Priest of Bel was Actually a Greek Philosopher

But there are at least two reasons for believing that Berossos really did cast himself as a philosopher in the vein of a Zeno. First, his reading of the Enūma Eliš was not the only possible one, nor was Berossos the first to isolate cosmic principles from the poem.

A generation or so earlier, Aristotle’s pupil Eudemos of Rhodes had already had access to a Greek text of the Enūma Eliš and had taken it to encapsulate the principles of Babylonian philosophy as follows:

Among the barbarians, the Babylonians appear to pass over the idea of a single principle in silence and instead to assume two principles of the universe, Tauthe (~ Tiamat) and Apason (~ Apsu), making Apason the husband of Tauthe, and calling her the mother of the gods.

Of these was born an only-begotten son, Moumis (~ Mummu) who, it seems, brought about the intelligible universe from the two first principles.

The same parents also gave rise to another generation, Dache and Dachos (~ Lahmu and Lahamu); and yet another, Kissare and Assoros (~ Kišar and Anšar), who in turn had three sons, Anos (~ Anu), Illinos (~ Ellil) and Aos (~ Ea).

Aos and Dauke (~ Damkina) begot a son called Bel who they say is the demiurge.

Like Berossos, Eudemos reads the Enūma Eliš as an account of physics and singles out two cosmic principles, one male one female.

However, unlike Berossos he identifies these principles with Tiamat and Apsu, rather than Tiamat and Bel, and focuses on the opening genealogy of the gods rather than on tablets 4-6 of Enūma Eliš, which describe the battle among the gods and the creation of the world and man. 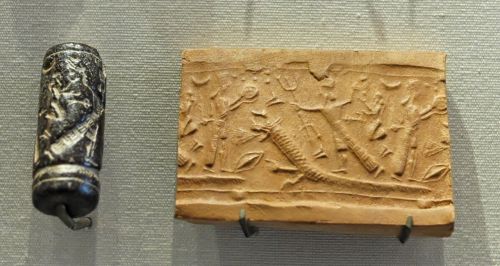 Segell cilíndric i la seva impressió, representant una escena mitològica: Asshur atacant un monstre és aclamat per una deessa. Segles IX-VIII aC
http://ca.wikipedia.org/wiki/Asshur#/media/File:Cylinder_seal_mythology_Louvre_AO30255.jpg
British Museum 89589.
A black serpentinite cylinder seal portrays a snout-nosed, horned Tiamat as a dragon.
A bearded god, Ninurta or Bel-Marduk, runs along the reptile’s body with crossed, wedge-tipped quivers on his back. In his right hand he holds a six-pronged thunderbolt below which is a rhomb, while in his left he holds two arrows.
Behind the god, a smaller bearded god in a horned head-dress holds a spear.
On the tail of the dragon stands a goddess, to the left of her head is the eight-rayed star of Istar and the inverted crescent of the Moon God Sin.
The seal may illustrate a scene from the epic of creation in which the forces of chaos, led by Tiamat, are defeated by a god representing cosmic order, Ninurta, or Bel-Marduk.
© The Trustees of the British Museum
http://www.britishmuseum.org/research/collection_online/collection_object_details/collection_image_gallery.aspx?assetId=159863&objectId=277961&partId=1

Judging by Polyhistor’s summary, Berossos seems to have skipped over those early genealogies; or at least to have shifted the main weight of his paraphrase elsewhere. It may seem hazardous to argue from absence in a text as badly mutilated as the Babyloniaca.

However, the entire thrust of Polyhistor’s narrative, including the framing account of Oannes, seems to suggest that the primordial soup of BNJ680 F lb(6), and the monsters in it, really did come first.

There is another feature of Berossos’ narrative which sets him apart from Eudemos: he translates the names of Babylonian deities into their Greek equivalents rather than merely transliterating them. Unlike his forerunner, Berossos was clearly interested in making his account accessible — and meaningful — to a wider Greek audience.

This leads me to my sec­ond reason for thinking that Berossos was quite actively modelling himself on contemporary Greek philosophers like Zeno, and that is his method of reading myth, as encapsulated in the phrase, ‘but he says that this amounts to an allegorical account of physics’.

The phrasing here has been deemed late, though Demetrius, On Style, already uses similar language, and Zeno’s pupil and successor as head of the Stoa, Cleanthes, may have done too.

Whether or not Berossos actually said άλληγορικώζ πεφυσιολογήσθαι, the sentiment is clearly his — for he must be the one who translated Omorka/Tiamat into Greek θάλασσα, hardly a fully fledged mythological character in the Greek imagination.

More generally, the entire thrust of his reading of Enūma Eliš seems to me to be self-evidently rationalising, and, in a rather loose sense of the word, allegorising too.”