Lenzi: The Mythology of Scribal Succession

“The text of the ULKS is as follows:

“During the reign of Ayalu, the king, Adapa was sage.

During the reign of Alalgar, the king, Uanduga was sage.

During the reign of Ameluana, the king, Enmeduga was sage.

During the reign of Amegalana, the king, Enmegalama was sage.

During the reign of Enmeušumgalana, the king, Enmebuluga was sage.

During the reign of Dumuzi, the shepherd, the king, Anenlilda was sage.

During the reign of Enmeduranki, the king, Utuabzu was sage.

After the flood,(?) during the reign of Enmerkar, the king, Nungalpirigal was sage, whom Ištar brought down from heaven to Eana. He made the bronze lyre, whose . . . (were) lapis lazuli, according to the technique of Ninagal (Ninagal is Ea’s smith). The lyre was placed before Anu . . ., the dwelling of (his) personal god.?

During the reign of Gilgamesh, the king,? Sin-leqi-unnini was scholar.

During the reign of Ibbi-Sin, the king, Kabti-ili-Marduk was scholar.

During the reign of Išbi-Erra, the king, Sidu, a.k.a. Enlil-ibni, was scholar.

During the reign of . . ., the king, Esagil-kin-apli was scholar.

During the reign of Adad-apla-iddina, the king, Esagil-kin-ubba (this name … despite chronological problems, is probably to be identified with Saggil-kina-ubbib, the author of The Babylonian Theodicy; see van Dijk, “Die Inschriftenfunde,” 51) was scholar.

During the reign of Nebuchadnezzar, the king, Esagil-kin-ubba was scholar.

During the reign of Esarhaddon, the king, Aba-Enlil-dari was scholar, whom the Arameans call Ahiqar.

Tablet of Anu-belšunu, son of Nidintu-Anu, descendant of Sin-leqi-unnini, the lamentation-priest of Anu and Antu. An Urukean. (Copied) by his own hand. Uruk, 10 Ayyar, 147th year of Antiochus, the king.

The one who reveres Anu will not carry it off.”

Gaining a historical perspective on the scholarly genealogical tradition attested in the text of ULKS is the first element of contextualizing our text. Clearly, the ULKS is unique. 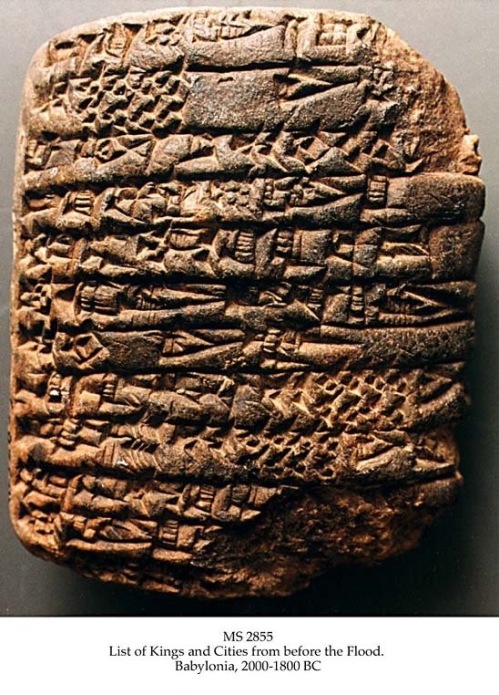 MS 2855
Text:
“IN ERIDU: ALULIM RULED AS KING 28,800 YEARS. ELALGAR RULED 43,200 YEARS. ERIDU WAS ABANDONED. KINGSHIP WAS TAKEN TO BAD-TIBIRA. AMMILU’ANNA THE KING RULED 36,000 YEARS. ENMEGALANNA RULED 28,800 YEARS. DUMUZI RULED 28,800 YEARS. BAD-TIBIRA WAS ABANDONED. KINGSHIP WAS TAKEN TO LARAK. EN-SIPA-ZI-ANNA RULED 13,800 YEARS. LARAK WAS ABANDONED. KINGSHIP WAS TAKEN TO SIPPAR. MEDURANKI RULED 7,200 YEARS. SIPPAR WAS ABANDONED. KINGSHIP WAS TAKEN TO SHURUPPAK. UBUR-TUTU RULED 36,000 YEARS. TOTAL: 8 KINGS, THEIR YEARS: 222,600”
MS in Sumerian on clay, probably Larsa Babylonia, 2000-1800 BC, 1 tablet, 8,1×6,5×2,7 cm, single column, 26 lines in cuneiform script.
5 other copies of the Antediluvian king list are known only: MS 3175, 2 in Oxford: Ashmolean Museum, one is similar to this list, containing 10 kings and 6 cities, the other is a big clay cylinder of the Sumerian King List, on which the kings before the flood form the first section, and has the same 8 kings in the same 5 cities as the present.
A 4th copy is in Berkeley: Museum of the University of California, and is a school tablet. A 5th tablet, a small fragment, is in Istanbul.
The list provides the beginnings of Sumerian and the world’s history as the Sumerians knew it. The cities listed were all very old sites, and the names of the kings are names of old types within Sumerian name-giving. Thus it is possible that correct traditions are contained, though the sequence given need not be correct. The city dynasties may have overlapped.
It is generally held that the Antediluvian king list is reflected in Genesis 5, which lists the 10 patriarchs from Adam to Noah, all living from 365 years (Enoch) to 969 years (Methuselah), altogether 8,575 years.
It is possible that the 222,600 years of the king list reflects a more realistic understanding of the huge span of time from Creation to the Flood, and the lengths of the dynasties involved.
The first of the 5 cities mentioned, Eridu, is Uruk, in the area where the myths place the Garden of Eden, while the last city, Shuruppak, is the city of Ziusudra, the Sumerian Noah.
Jöran Friberg: A Remarkable Collection of Babylonian Mathematical Texts. Springer 2007.
Sources and Studies in the History of Mathematics and Physical Sciences.
Manuscripts in the Schøyen Collection, vol. 6, Cuneiform Texts I. pp. 237-241. Andrew George, ed.: Cuneiform Royal Inscriptions and Related Texts in the Schøyen Collection, Cornell University Studies in Assyriology and Sumerology, vol. 17,
Manuscripts in the Schøyen Collection, Cuneiform texts VI. CDL Press, Bethesda, MD, 2011, text 96, pp. 199-200, pls. LXXVIII-LXXIX.
Andrew E. Hill & John H. Walton: A Survey of the Old Testament, 3rd ed., Grand Rapids, MI., Zondervan Publ. House, 2009, p. 206.
Zondervan Illustrated Bible, Backgrounds, Commentary. John H. Walton, gen. ed. Grand Rapids, MI., Zondervan, 2009, vol 1, p. 482, vol. 5, p. 398.
Babylonia
2000 – 1800 BC
http://www.schoyencollection.com/history-collection-introduction/sumerian-history-collection/king-cities-before-flood-ms-2855

The list is arranged from start to finish in what one must recognize as an attempt at chronological order. Focusing on the ummânū, the implication of the text is rather clear: the human, post-diluvian scholars are the direct professional descendants of the earlier semi-divine apkallū.

In a previous study I called this traditional genealogical relationship the “mythology of scribal succession.”

One Comment to “Lenzi: The Mythology of Scribal Succession”