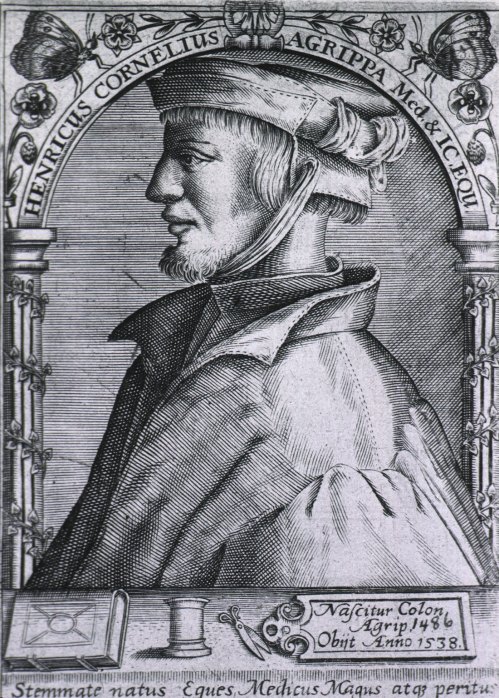 Heinrich Cornelius Agrippa von Nettesheim (1486-1535), portrait B01617 at the US National Library of Medicine. This work is in the public domain in its country of origin and other countries and areas where the copyright term is the author’s life plus 100 years or less.

“The idea that Hebrew was a language endowed with a mystical “force” had already appeared in both the ecstatic kabbala (described in ch. 2) and the Zohar, where (in 75 b, Noah) it is declared not only that the original Hebrew was the language that expressed the desires of the heart in prayer, but also that it was the only language understood by the celestial powers.

By confusing the tongues after the disaster of Babel, God had hindered the rebellious tower-builders from ever pressing their will upon heaven again. Immediately afterwards, the text goes on to observe that, after the confusion, human power was weakened, because only the words uttered in the sacred tongue reinforce the power of heaven.

The Zohar was thus describing a language that not only “said” but “did,” a language whose utterances set supernatural forces in motion.

To use this sacred tongue as an acting force, rather than as a means of communication, it was not even necessary to understand it. Some, of course, had studied Hebrew grammar in order to discover the revelations therein; for others, however, Hebrew was all the more sacred and efficacious for remaining incomprehensible.

The less it was penetrable, the brighter its aura of “mana” shone, and the more its dictates escaped human intelligences, the more they became clear and ineluctable to supernatural agents.

Such a language no longer even had to be the original Hebrew. All it needed to do was to seem like it.

And thus, during the Renaissance, the world of both black and white magic became populated with a vast array of more or less Semitic-sounding names, such as the clutch of angels’ names which Pico released into a Renaissance culture already abundantly muddled by the vagaries of both Latin transliteration and the innocence of the printers–Hasmalim, Aralis, Thesphsraim . . .

In that part of his De occulta philosophia dedicated to ceremonial magic, Agrippa also paid particular attention to the pronunciation of names, both divine and diabolic, on the principle that “although all the devils or intelligences speak the language of the countries over which they preside, they speak only Hebrew whenever they deal with someone who knows their mother tongue” (III, 23).

“The spirits can be bent to our wills only if we take care to pronounce their names properly: “These names [ . . . ] even though their sound and meaning are unknown, have, in the performance of magic [ . . . ] a greater power than meaningful names, when one, left dumbfounded by their enigma [ . . . ] firmly believing to be under divine influence, pronounces them with reverence, even if one does not understand them, to the glory of the divinity” (De occulta philosophia, III, 26).

The same could also be said of magical seals. Like Paracelsus, Agrippa made an abundant use of alphabets with pseudo-Hebraic characters. By a process of graphic abstraction, mysterious configurations were wrought from the original Hebrew letters and became the basis for talismans, pentacles and amulets bearing Hebrew sayings or versicles from the Bible. These were then put on to propitiate the benign or to terrorize the evil spirits.”