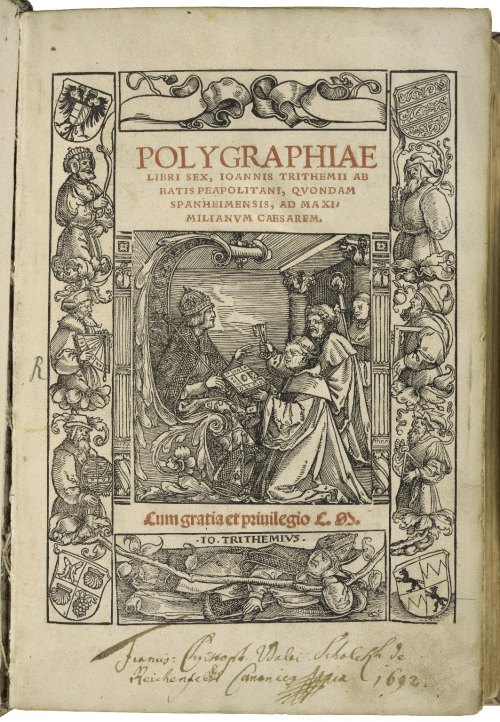 Johannes Trithemius (1462-1516), Polygraphiae libri sex, Basel, 1518. Courtesy of the Shakespeare Folger Library as file number 060224. Joseph H. Peterson at the Esoteric Archives digitized a copy of the complimentary work on steganography held by the British Library in 1997. That work is listed as Trithemius, Steganographic: Ars per occultam Scripturam animi sui voluntatem absentibus aperiendi certu, 4to, Darmst. 1621. London, British Library. This work is in the public domain in its country of origin and other countries and areas where the copyright term is the author’s life plus 100 years or less.

“A peculiar mixture of kabbalism and neo-Lullism arose in the search for secret writings–steganographies. The progenitor of this search, which was to engender innumerable contributions between humanism and the baroque, was the prolific Abbot Johannes Trithemius (1462-1516).

Trithemius made no references to Lull in his works, relying instead on kabbalistic tradition, advising his followers, for instance, that before attempting to decipher a passage in secret writing they should invoke the names of angels such as Pamersiel, Padiel, Camuel and Aseltel.

Thus Trithemius elaborated texts such as “Camuel Busarchia, menaton enatiel, meran sayr abasremon.” Trithemius, however, played his game of kabbala and steganography with a great deal of ambiguity. His Poligraphia seems simply a manual for encipherment, but with his posthumous Steganographia (1606 edition) the matter had become more complex.

Many have observed (cf. Walker 1958: 86-90, or Clulee 1988: 137) that if, in the first two books of this last work, we can interpret Trithemius‘ kabbalist references in purely metaphorical terms, in the third book there are clear descriptions of magic rituals.

Angels, evoked through images modeled in wax, are subjected to requests and invocations, or the adept must write his own name on his forehead with ink mixed with the juice of a rose, etc.

In reality, true steganography would develop as a technique of composing messages in cipher for political or military ends. It is hardly by chance that this was a technique that emerged during the period of conflict between emerging national states and flourished under the absolutist monarchies.

Still, even in this period, a dash of kabbalism gave the technique an increased spice.

It is possible that Trithemius‘ use of concentric circles rotating freely within each other owed nothing to Lull: Trithemius employed this device not, as in Lull, to make discoveries, but simply to generate or (decipher) cryptograms.

Every circle contains the letters of the alphabet; if one rotates the inner wheel so as to make the inner A correspond, let us say, to the outer C, the inner B will be enciphered as D, the inner C as E and so on (see also our ch. 9).

It seems probable that Trithemius was conversant enough with the kabbala to know certain techniques of temurah, by which words or phrases might be rewritten, substituting for the original letters the letters of the alphabet in reverse (Z for A, Y for B, X for C, etc.).

This technique was called the “atbash sequence;” it permitted, for example, the tetragrammaton YHWH to be rewritten as MSPS. Pico cited this example in one of his Conclusiones (cf. Wirzubski 1989: 43).

But although Trithemius did not cite him, Lull was cited by successive steganographers. The Traité des chiffres by Vigenère (1587) not only made specific references to Lullian themes, but also connected them as well to the factorial calculations first mentioned in the Sefer Yezirah.

However, Vigenère simply follows in the footsteps of Trithemius, and, afterwards, of Giambattista Della Porta (with his 1563 edition of De furtivis literarum notis, amplified in subsequent editions): he constructed tables containing 400 pairs generated by 20 letters; these he combined in triples to produce what he was pleased to call a “mer d’infini chiffrements à guise d’un autre Archipel tout parsemé d’isles . . . un embrouillement plus malaisé à s’en depestrer de tous les labrinthes de Crete ou d’Egypte” (pp. 193-4), a sea of infinite cryptograms like a new Archipelago all scattered with isles, an imbroglio harder to escape from than all the labyrinths of Crete and Egypt.

The fact that these tables were accompanied by lists of mysterious alphabets, some invented, some drawn from Middle Eastern scripts, and all presented with an air of secrecy, helped keep alive the occult legend of Lull the kabbalist.

There is another reason why steganography was propelling a Lullism that went far beyond Lull himself. The steganographers had little interest in the content (or the truths) expressed by their combinations.

It was, in short, merely a technique in which one symbol replaced another. This encouraged formalism: steganographers sought ever more complex combinatory stratagems, but all that mattered was engendering new expressions through an increasingly mind-boggling number of purely syntactic operations. The letters were dealt with as unbound variables.

By 1624, in his Cryptometrices et cryptographie libri IX, Gustavus Selenus was designing a wheel of 25 concentric volvelles, each of them presenting 24 pairs of letters. After this, he displays a series of tables that record around 30,000 triples. From here, the combinatory possibilities become astronomical.”