Nakamura: An Idiom of Protection Arises in the Material Enactment of Memory

“In the material register, Neo-Assyrian figurine assemblages present a physical gesture of miniaturization, hybrid form, and concealment. I have intimated that such material gestures disclose a magic technology as a symbolic and sensual logic that conspires with and against conventional value-producing forms.

The question now becomes one of how this material reality presents protection. I would suggest that in the context of apotropaic performance, a material economy that produces a miniature, hybrid, and hidden reality anchors and accomplishes an experience of human mastery.

Furthermore, this suite of gestures skillfully sustains the belief in divine power and order through a cunning reversal. The collision of Neo-Assyrian socioreligious beliefs with this material making engenders a force that cannot be contained or mastered by narrative closure.

This resistance to such mastery, in effect, secures magic’s very power. Magic does not seek the restoration of balance or the resolution of contradiction (Taussig 1993:126), rather it renders such contradiction immaterial, and in doing so, masters the system which defines the conditions of its disclosure.

The slippage between meaning and matter, belief and practice, enshrouds magic in secrecy that is at once opaque and transparent. As both contingent and autonomous, the magical object secretes indeterminacy into the structure that conceives it, holds it at a distance and thereby masters it.

Artifacts congeal processes of making — the simultaneous forging of objects, selves, relations, cultures, and worlds — in a gesture of becoming. To make is to transform, and such transformation derives from the human enactment of both the self and the world.

If we accept Bakhtin’s idea that to be means to communicate, then figurines are self-creating works that specifically address communications among various beings, human, animal, divine, and supernatural.

They provide the material site for the human action of creation which moves back on the human creators themselves (Scarry 1985:310), and this reverse process acts in complicit as much as disruptive, subversive, and obfuscating ways.

Notably then, the process of material creation discloses a certain “mimetic excess” (cf. Taussig 1993) whereby reproduction amounts to metamorphosis, self-amplification to self-effacement, and divergence to unity. 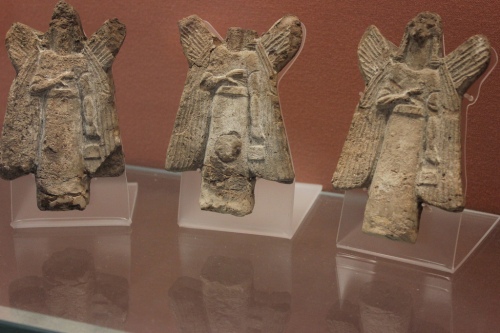 Bird-apkallū, with hands on their chests, and banduddu buckets in their left hands.

The Neo-Assyrians crafted protective figurines as clay or stone copies of various mythological and supernatural beings. Their form as miniature, portable, durable, free-standing, three-dimensional objects confronts humans within a distinct relationship; namely, this material choreography reproduces powerful beings in a reality that assumes an anthropocentric universe for its absolute sense of scale (following Stewart 1984:56).

The materiality of the figurine thereby discloses the authority of humans over the copy, and hence over the original. Here, the production and reception of the copy itself becomes a “dramatic form of (social) experience” (Jenson 2001:23), namely, that of human mastery.

Whether deity, double, ancestor, spirit, or animal, the “original” comes to inhabit a material reality of human design. As petrified and choreographed “life,” the figurine recreates the human as master in this relation, a relation whereby humans, as all-powerful giants, assert and play out their desires within the diminutive tableau of the figurine.

The specific “bundling” of material properties of the figurine provides an enduring frame and anchor for the various ways in which other subjects relate to it thereafter. As a thing, the petrified miniature object will always encounter and constitute subjects as vigorous, gigantic masters with the capacity to possess, manipulate, command, and destroy.

Through this production of figurines, Neo-Assyrian apotropaic rituals trace out complex, and even disorienting, relations between humans, deities, and various supernatural beings in space and time.

Throughout the ritual, the āšipu priest creates protective beings in a perpetual mode of dedication to important deities who are the “creators” of humankind. I have previously argued that these acts of dedication constitute a giving that takes back (Nakamura 2004); here, dedication is a demand for protection, a dialectic of giving that gives back more in return.

Protection then arises from the “mimetic slippage” that exacts a brash assertion of human mastery over divine power, masked through a posed reality of servitude. Apotropaic rituals enact a radical synthesis of material work and belief that configures a force capable of surmounting contradiction.

The durable material gestures of miniaturized scale, hybrid form, and concealment inscribe the subterranean landscape, effectively preserving a desired past for the future. In this way, an idiom of protection arises in the material enactment of memory.”