” … In 691 B.C. Sennacherib again struck a blow for Babylonia, but was unable to depose Mushezib-Merodach. His opportunity came, however, in 689 B.C. Elam had been crippled by raids of the men of Parsua (Persia), and was unable to co-operate with the Chaldaean king of Babylon.

Then he wreaked his vengeance on Babylon.

For several days the Assyrian soldiers looted the houses and temples, and slaughtered the inhabitants without mercy. E-sagila was robbed of its treasures, images of deities were either broken in pieces or sent to Nineveh: the statue of Bel-Merodach was dispatched to Asshur so that he might take his place among the gods who were vassals of Ashur.

“The city and its houses,” Sennacherib recorded, “from foundation to roof, I destroyed them, I demolished them, I burned them with fire; walls, gateways, sacred chapels, and the towers of earth and tiles, I laid them low and cast them into the Arakhtu.”

“So thorough was Sennacherib’s destruction of the city in 689 B.C.,” writes Mr. King, “that after several years of work, Dr. Koldewey concluded that all traces of earlier buildings had been destroyed on that occasion. More recently some remains of earlier strata have been recognized, and contract-tablets have been found which date from the period of the First Dynasty.

Moreover, a number of earlier pot-burials have been unearthed, but a careful examination of the greater part of the ruins has added little to our knowledge of this most famous city before the Neo-Babylonian period.”

Sennacherib’s palace was the most magnificent building of its kind ever erected by an Assyrian emperor. It was lavishly decorated, and its bas-reliefs display native art at its highest pitch of excellence.

The literary remains of the time also give indication of the growth of culture: the inscriptions are distinguished by their prose style. It is evident that men of culture and refinement were numerous in Assyria. The royal library of Kalkhi received many additions during the reign of the destroyer of Babylon. 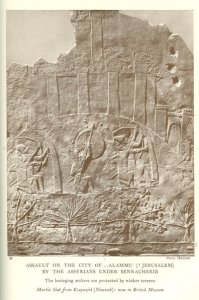 Like his father, Sennacherib died a violent death. According to the Babylonian Chronicle he was slain in a revolt by his son “on the twentieth day of Tebet” (680 B.C). The revolt continued from the “20th of Tebet” (early in January) until the 2nd day of Adar (the middle of February). On the 18th of Adar, Esarhaddon, son of Sennacherib, was proclaimed king.

Berosus states that Sennacherib was murdered by two of his sons, but Esarhaddon was not one of the conspirators. The Biblical reference is as follows:

“Sennacherib … dwelt at Nineveh. And it came to pass, as he was worshipping in the house of Nisroch (?Ashur) his god, that Adrammelech and Sharezer (Ashur-shar-etir) his sons smote him with the sword: and they escaped into the land of Armenia (Urartu). And Esarhaddon his son reigned in his stead.”

Ashur-shar-etir appears to have been the claimant to the throne.